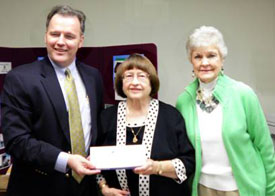 Raymond Reed, a long-time resident of Waynesboro, project manager and supporter of Staunton–Augusta-Waynesboro Habitat for Humanity, passed away last March.  But his dream to create housing for working poor families didn’t because he and his wife, Peggy Reed, share the same vision.

At a recent volunteer dinner Peggy Reed was recognized for her work stepping up to continue her husband’s service on Habitat’s Board of Directors.  Their gift of $100,000 earmarked for Waynesboro projects was announced today as a matching gift opportunity for the 2012 Habitat campaign, “What Will You Build?”

The Reed family has served SAW Habitat on 13 Waynesboro home projects and has been the central force behind Habitat’s vision for Waynesboro that involves building a planned community of low-maintenance green homes – offering 25 families of various low incomes opportunity for quality and affordable homeownership.

SAW Habitat Executive Director Rhonda Howdyshell noted that the Reed’s gift will allow others to know that their gift to the Habitat’s “What Will You Build” campaign will be matched.  She noted that Habitat is the only low-income housing opportunity that partners working families in need of decent housing, with caring community members to create homeownership opportunities … not low income housing.

Housing studies show consistently that homeownership increases community vitality and reduces crime.  It creates healthier families and improves test scores for students who have a decent environment to study in.  In fact, fifteen (15) of SAW Habitat children have gone on to higher education and four (4) of the high school seniors have been at the top of their class.

The Habitat program does not give homes away, instead families must work sweat equity to build their home and those of others.  As homeowners, they pay taxes, insurance, and a mortgage while becoming stakeholders and a vested part of the community in which they live.