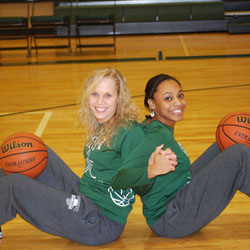 Bruised knees, sore muscles, strawberries (a form of floor burn that occurs when your body slides across a gymnasium floor), a sprained ankle for Mariah Taylor last year, and a broken nose for MaryKate Sullivan just last week. The two senior players on the Wilson Memorial High School girls’ basketball team have experienced all the aches and pains of the sport, and more than that, they’ve experienced it together.

The two have been partnered on the court since they first began their athletic careers in the All-Stars Youth Basketball League, and although the who hasn’t changed, the where and what certainly have. Along with All-Stars, Taylor and Sullivan also participated in Wilson Youth League Basketball starting at age 8, JV basketball, UNC basketball camp, and eventually reached their current status as varsity players. They have played games in the Wilson Rec Gym, Wilson’s auxiliary gym (what was the main gym before the renovations and addition of the new gym in 2006), the current Wilson gym, and on a court at every high school they’ve ever played against. Both players agree that it was their families who motivated, pressured, and comforted them throughout all the wins, losses, practices, and camps. Taylor was especially influenced by her father through his coaching and advice; the two can often be seen at the YMCA working to keep her impeccable three-point range shots in practice and effective.

Sullivan commented saying, “We’ve definitely grown since then. It’s hard to think that that much time has gone by. My favorite memory is probably UNC camp or Mariah in little league with her braids and her glasses … hah, that’s a good one.”

The team has won 11 out of the 17 games they have played this season. The pair credit the team’s wins to the relationship they have with each other and their team as a whole, Taylor saying, “We’re best friends, and I get along with pretty much every player. We have good chemistry on the team.” And Sullivan adding, “We’ve all been together since All-Stars and little league, all of us really, and me and Riah [Mariah] are like sisters.” Also important to their success, they credited their coach, Jackie Bryan. “Ah…Coach Bryan. She’s funky; she’s a unique person; one of a kind. Basketball equals life. That’s the quote for her, B-ball equals life.”

“Like sisters,” as stated by Sullivan, does seem to be the most appropriate way to describe the pair. The two have even been applying to the same colleges with the hope of getting accepted to the same school, having the chance to play alongside each other again, and even having the opportunity to be roommates. So far, their potential college list includes Roanoke College, Lynchburg and Virginia Wesleyan.

Sullivan and Taylor were recognized along with 11 other seniors presented at part one of Wilson Memorial High School’s Winter Sports Senior Night presentations that took place between the JV and varsity games against Rockbridge Friday night. Teary-eyed mothers, father’s with firm pats on the back, teammates with gifts, and friends ready with hugs were in abundance at Wilson that night as each name was called along with a list of their achievements and plans for next year. No list was exceedingly short, showing how much each athlete has tried to accomplish throughout their four years and showing how well rounded and non-stereotypical Wilson senior athletes are. Joseph Demarchi, Yanni Hedjar, Emily Kellington, Mitch Mitchner, Josh Philips, Dominick Puzio, David Swisher, Carrie Thomas and McCauley Vailes were presented for participation in indoor track. Amanda Gale and Kaitlyn Trent were presented for cheerleading. The last ones presented were the two girls’ basketball players, who had to hurry back to the locker room to prepare for the game.

During an incredible first half, Wilson jumped to an early 21-8 lead at the first quarter, the first points coming from a three-pointer made in the first 15 seconds of the game by Taylor, who was the standout player of the game. She scored 25 points by the end of the game, including many in the three-point range. The largest lead for Wilson during the game was 28 points, which was at the final score mark, 59-31.

All of the senior athletes are coming to the realization that their high school careers are coming to a close. Even if they are participating in spring sports, eventually it will be their last chance to wear their green and white uniform and show their Hornet pride on the court, field, mat, track, or course. However, Wilson is noted for having an athletic camaraderie that pulls alumni back for games and events (a tradition that even I, a nonathletic, physically uninspiring student, can appreciate). “It’s sad, but we got to finish it out. Definitely,” Sullivan commented, and then added that underclass athletes should, “Work at it. Every day. Go to everything you can, don’t miss it. You’re gonna wish you went to that open gym and done everything you could.” Not quite hit with emotions yet, the duo does not feel like the inevitable end is real yet. “It will probably hit us at the last game.”

Story and video by Suzi Foltz. Photo by Jaylen Crist. Suzi and Jaylen are students at Wilson Memorial High School.