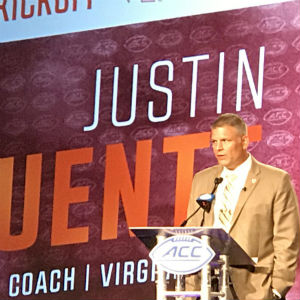 JUSTIN FUENTE: We had a great workout yesterday. Kids have responded from what was a tough week last week. We’re well into preparations for the best Duke team we’ve played since I’ve been here. We’ve kind of seen that coming for some time with David and his squad. Over the last couple years, you could just see them continuing to improve, and they’ve got a pretty special team this year.

We’ve got to have a great week of preparation. We’re going to continue it again this afternoon to get ready to go down there and play.

Q. You mentioned seeing this coming for Coach Cutcliffe and his staff. They’re very experienced defensively, but when Coach Knowles went to Oklahoma State, do you see much difference schematically on the defensive side from what they did last season?
JUSTIN FUENTE: You know, just — I think they’ve changed a little bit each year in my short time in this league playing against them. I think you can tell at the end of the year they evaluate their strengths and weaknesses and try and figure out what they did well and what they didn’t do well. And then try and change them to fit what they think are going to be moving forward.

I don’t know that you would be able to tell that there’s a different coordinator, but you can certainly tell from last year to this year as it was from ’16 to ’17 that they’ve made some tweaks and tried to play to their hand, so to speak, play to their strengths.

Q. And then on the other side of the ball, how differently are they with Harris as opposed to Daniel Jones?
JUSTIN FUENTE: I don’t think they’re — I don’t think it’s a huge departure. I mean, they are a little bit different guys, but I see them running their offense. They’ve been incredibly sound and efficient. They may be a little bit better here or there now or before, but in general terms, from a big picture standpoint, I see them being pretty similar.

Q. Specifically to what David asked you the first time, do you see them getting more pass rush, more pressure with just four down linemen as opposed to maybe a year or two ago when it seemed like they blitzed a little bit more?
JUSTIN FUENTE: I would agree with that, particularly two years ago. They were a pretty big zone blitz team from the field and the boundary and all sort of stuff. As their personnel has continued to improve up front, I think they have relied more on those guys to get to the passer and have done a really good job of it. They have been able to rush four and through either straight rushes or using some of their games and twists up front been able to put a tremendous amount of pressure on the quarterback.

Q. In terms of Trevon Hill, is there any path for him to return to this program at any point?
JUSTIN FUENTE: No, we’re moving forward.

Q. I’m working on a story about Jahque Alleyne at Montana State. I wondered what you remember about the year that you spent together?
JUSTIN FUENTE: I really like the kid. That’s the first thing that I remember. I think he’s a pretty sharp young man. What side of the ball is he playing on up there?

Q. He’s playing safety.
JUSTIN FUENTE: Is he playing safety? Okay. I felt like he had talent to maybe play on either side of the ball, quite honestly. But I know in high school he was a little bit more of an offensive guy. But I’m happy he’s doing well and enjoyed having him here, and I’m glad to see that football is important for him and that he’s continuing his career and his education.

Q. With Josh Jackson going down and Ryan Willis stepping in, I know you’ve got a couple other guys behind Willis, as well, what the quarterback room looks like and just your expectations moving forward knowing that you won’t have Jackson for a little while?
JUSTIN FUENTE: I’m pleased with the development in our room. Obviously I’m happy that we have Ryan here in our program. He’s been in our program for some time now. It’s not often that you have a backup quarterback that has experience at the Division I level, and Ryan has got that and has shown flashes of doing some really good things.

And then we have two young guys in there that continue to get better with every rep. I mean, they are big, physical kids that I think are going to have opportunities as they continue to develop to be really good players.

Q. You made mention that it’s not something you see every day to have a backup quarterback with experience, but what happened with Kelly Bryant at Clemson and this redshirt rule that allows the opportunity to play four games and then potentially leave, do you think that this could hurt that opportunity for a team like yourself where your starting quarterback goes down and you don’t necessarily have that guy there, if he got frustrate or upset and decides to leave, could this rule kind of backfire in a situation where you need a guy to step up during an injury?
JUSTIN FUENTE: I certainly — I don’t want to address the Kelly Bryant deal. Like I don’t really have very much knowledge about that whole situation. I’ve been locked up in the staff room all day. Pete just told me that he’s leaving. I don’t really know what all went into that. But in general terms, I do think there’s potential for more transfers. I mean, that’s quite honestly part of the society that we live in now, and kids are transferring in high school, they’re transferring in junior high, they’re transferring all over the place, and that’s part of what we’re dealing with right now.

In terms of the redshirt rule, yeah, certainly. It’s another thing for players and coaches alike to consider when trying to make decisions that are best for them.