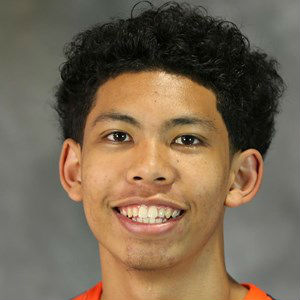 Last week, in Virginia’s win at UNC, Clark played 27 of the game’s first 28 minutes, then, after checking out with 11:32 to go, didn’t check back in, as the ‘Hoos closed out the Tar Heels on a 26-12 run to turn a six-point deficit into an eight-point win.

Last night, then, at Virginia Tech, you saw Clark play all 20 minutes of the first half, recording two assists, but also shooting an airball on an open corner three, then hesitating uncomfortably on another open corner three before pulling the trigger, and missing badly.

He had a third shot, a dribble-drive to the rim, blocked.

And then came what may have been the jump the shark moment.

After grabbing a loose-ball rebound in the closing seconds of the first half, Clark saw Kyle Guy ahead of him, still in the backcourt, and tried to get the ball to him for, at best, a halfcourt heave?

I’m seriously not sure what the thinking was on that pass.

Which was stolen by Isaiah Wilkins, who raced to the hoop for a layup at the buzzer, that got the Hokies to within three at the break.

Coach Tony Bennett stormed out to Clark as the teams were leaving the floor, visibly upset, and I was thinking then, we won’t see Clark again tonight.

He did check back in at the 12:19 mark, though according to the box score, he did nothing for his two minutes on the floor – no shots, no assists, no rebounds, no steals – before checking back out with 10:19 to go.

Clark’s value has always been one of perception, and on the defensive end. His defensive rating, per sports-reference.com, is 93.5, the worst among the UVA rotation regulars, but he earned his minutes – 25.5 per game, fourth-most on the team – with ball pressure.

Among his highlights was ball-hawking Virginia Tech point guard Justin Robinson into a nine-point, 2-for-7 shooting performance in Virginia’s 81-59 win in Charlottesville last month, on a night that saw Clark score nine points himself, in 30 minutes, on 3-of-5 shooting from three.

He had 12 in a road win at Notre Dame, and started at point, in place of an injured Ty Jerome, and led Virginia to a 56-46 win over Miami on Feb. 2, scoring nine points and dishing out six assists.

But he also had six turnovers in that Miami win, and seemed oddly out of sync with his teammates.

You have to wonder if something happened there that zapped his confidence, because since, he hasn’t been the same.

Over his past four, Clark has been averaging 24 minutes a game, but he’s shot just 2-of-15 from the floor, and become a liability on the offensive end.

He’s not a threat on dribble-drives, except to pass back out to the perimeter, so he doesn’t draw help; and he’s not a threat on the wing and in the corner to hit the open shot, so defenders are leaving him out there and daring him to shoot it.

He’s gone from a guy whose main value is out front with ball pressure on guards on the defensive end who can at least knock down the open shot to a guy who can give you ball pressure, but, can you really have him out there on the floor at the same time as Jack Salt, another defense-only value guy?

And, can you have him out there giving up eight inches to the likes of Coby White? The 6’5” UNC point guard torched Clark for 15 points, on 6-of-12 shooting, before Bennett went to De’Andre Hunter on White in the final 11:32 last week, and from that point on, White would score just two more, on free throws, missing his last seven shots from the field.

It was Hunter’s defense that keyed that win.

Hunter, the lottery pick, had to fill in for the defensive specialist.

It wasn’t specifically defense last night, but a little bit of everything, that earned Clark a seat on the bench down the stretch as the ‘Hoos gritted out another road win.

I’m not advocating for Clark to be demoted from the rotation, not at all. Virginia is better when Clark is out front hawking guards, getting in their heads, knocking down the occasional open three, getting into the lane to dish to a big on a dive or to Guy or Jerome for an open jumper.

That said, if Clark doesn’t get out of this funk, his minutes are going to become less starter and more Jay Huff, with Braxton Key moving into the role of unofficial fifth starter, minutes-wise.