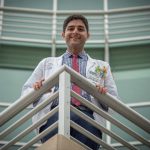 As a medical student at the Virginia Tech Carilion School of Medicine, Omar Salman had learned a lot about cancer: from what goes wrong at the cellular level to cause it as well as patient risk factors and treatment options.

Graduating cancer survivor embraces a career as an artist

Sandy Williams IV found his niche at the University of Virginia. The fourth-year student spends hours in Ruffin Hall.

Hello, my friends. This is a difficult subject as I had written about my own dealings with cancer.

An international team has discovered that an abnormal amount of chromosomes may be why certain cancers resist medical treatment.

Cancer survivors with financial difficulties have a higher risk of depressed mood and psychological distress.

A study evaluating the effects of bariatric surgery on obese women most at risk for cancer has found that the weight-loss surgery slashed participants’ weight by a third and eliminated precancerous uterine growths in those that had them.

Deborah Kelly, an assistant professor at the Virginia Tech Carilion Research Institute, was recently awarded a $1.8 million grant from the National Cancer Institute, a branch of the National Institutes of Health, to develop an innovative technique to investigate what causes proteins to err.

University of Virginia School of Medicine researchers have discovered a new strategy for attacking cancer cells that could fundamentally alter the way doctors treat and prevent the deadly disease.

Researchers at the Virginia Bioinformatics Institute at Virginia Tech have uncovered a link between the genomes of cells originating in the neural crest and development of tumors — a discovery that could lead to new ways to diagnose and treat cancer.

In a well-lit laboratory on the southwest side of campus, Virginia Tech undergraduate Kimberly Soto-Alvarado focused a high-resolution microscope on a bright orange liquid in a small clear flask.

Strange rings of DNA that exist outside chromosomes are distinct to the cell types that mistakenly produced them, researchers have discovered. The finding raises the tantalizing possibility that the rings could be used as an indicator of different types of cancer.

An international team of scientists, led by a Virginia Tech researcher, determined that the number of chromosomes in a cell may be a key to understanding how cancer forms and progresses – a finding that could help inform new treatments.