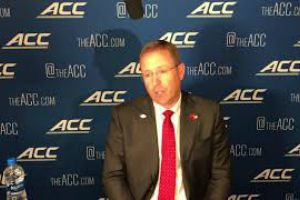 Probably obvious that he was going to be named ACC Football Coach of the Year.

The panel of 46 media members and the league’s 14 head coaches are dolts.

First, Satterfield, great job. Bobby Petrino left Louisville in a shambles a year ago, and Satterfield not only went 7-5 overall, but led his Cardinals to a 5-3 record in the ACC.

That was good for second in the Atlantic. The media had them pegged for seventh, dead last.

That turnaround earned Satterfield 23 votes from the panel.

Mendenhall got 17, and Swinney 15. Both are coaches of teams that had been projected to win their divisions, which they did.

Dave Clawson at Wake Forest got two votes. His team went 8-4 this year, after being picked sixth in the Atlantic.

Seems he might have done a fair job this season improving on the preseason projections.

Brown, at UNC, which was picked sixth in the Coastal, went 6-6, the six losses by a combined 26 points.

Two of them in OT.

One of them by one point to Clemson.

(After a failed two-point conversion with a minute to go.)