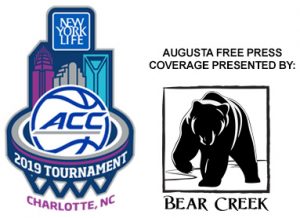 DANNY MANNING: Good afternoon. Obviously for us, not the outcome that we wanted going into the ballgame. Having split with Miami in the regular season, today we just didn’t make enough plays. I thought they did a really good job of putting their head down and driving the basketball and getting into the paint. You know, they ended up shooting 25 free throws for the game, and some of those are a little bit skewed because we were in catch-up mode and we were playing the foul game. But you look at the stats sheet, and both teams scored 27 field goals, both teams had seven three-pointers. They were plus eight on the free-throw line. We out-rebounded them by one.

So you know, I look at the free-throw line, and then we turned the ball over far too many times in certain situations. But they came out and made more plays than us this afternoon, and we didn’t get the win that we desired or wanted.

Q. Danny, it seems like you got some things going offensively when you were trying to make a comeback, but what was the problem on defense where you guys couldn’t seem to get any stops?
DANNY MANNING: You know, a lot of it is just couldn’t stay in front of Lykes or Johnson. Those two guys are really talented. And Lawrence played really well, also. You know, he got to the free-throw line. I thought in the first half, we lost D.J. a little bit too much. Going into it, we knew he was a knock-down shooter, and he gets off seven threes throughout the course of the ballgame.

So it’s just needing to do a better job of sitting down and staying in front of the basketball.

Q. To either of the players, how disappointing or frustrating is it to play so well in stretches like you did in the first half when you took the lead, and then the second half late in the game but not be able to sustain it at this point in the season?
BRANDON CHILDRESS: I mean, it’s obviously a tough part of it because of me as a leader, as a veteran of the team, I feel like I can do more, not just on the court but in terms of leadership level, just making sure guys keep our composure, things like that. But obviously we came up short. We had some good plays, had some good stretches throughout the course of the game, but I just feel like we didn’t do a good job of putting up a collective 40 minutes of basketball like we’ve been doing, especially the second half of the season.

JAYLEN HOARD: It was tough. You know, obviously we fought hard. We were just really trying to win the basketball game. But we weren’t like consistently throughout the game, and it’s happened like multiple times this year, and it’s frustrating because we fight hard out there on the court but can’t seem to put like 40 minutes together. So it was frustrating today.

Q. Brandon, this year you’ve had the weight of the team on your shoulders, playing a significant amount more minutes than last year. Talk about your growth as a player this year.
BRANDON CHILDRESS: It was a huge step for me. It started with Coach Manning from the beginning of the season telling me things are going to change for you, especially off the court. You’ve got to do a much better job of taking care of your body, understanding when to do more and do less, and most of it was just off the court, continue to have a good workout, continue to work but also maintain taking care of my body, eating right, getting enough rest, and just letting everything take care of itself. In the first half of the season, the numbers were good, just continuously to be solid throughout the course of the season. I had a little slump at one point, but he kept my head high, just told me to stay aggressive throughout the course of the season, and everything just took care of itself. That was basically it, just maintain the rest and just keeping my body strong and stuff like that.

Q. Danny, you had one of the youngest teams in the league, even the country this year, a team that’s probably a year away. Do you think you’re going to be back next year to coach them?
DANNY MANNING: That’s my hope. That’s always the hope. You know, I feel I’ll be back. You know, I’ll look at the score card, the score sheet and everyone that scored is an underclassman. You talked about it. We had some guys that grew a significant amount this year in terms of their growth from the start to the finish, and that’s how we want to build it. We build it with our young guys, and we had a really good freshman class come in and got a lot of key contributions from a lot of guys throughout the course of the season, and even tonight on the score card, we had a lot of freshmen make big contributions for us in terms of scoring the basketball and rebounding the basketball.

Q. Danny, what were your thoughts on the change in athletic director at Wake Forest, obviously John Currie taking over May 1st?
DANNY MANNING: I’m excited to work with John. Ron hired me, and I’ve gotten to know him very well during my time at Wake Forest. He’s become a good friend and been extremely supportive, and I look forward to building the same type of relationship as we move forward.

Q. Jaylen said that you guys have had a hard time putting 40 good minutes together all season. Is that just a product of the youth, or was there something else that prevented that from happening as the season went along?
DANNY MANNING: Well, I think it’s a combination of a few things. You don’t have experience until you have it, and I’ve said this before, we threw a lot of our — we threw all of our young guys out there to the wolves, so to speak, to kind of figure out on the fly, and they had some really good moments, and they had some freshman moments. But I think they’ve grown, and they’ve developed, and across the board. Brandon, this was a new role for him this year. This was a new role for Chaundee this year, even Olivier, the returning guys that we had. Everyone had a new role going into the season. I think we’ve shown some growth. I think there’s some times when we’ve done some really good things, and there’s some times when there’s some areas that we have to continue to improve in. But I do believe that this group continued to work hard and put forth the effort necessary to give ourselves a chance to improve and develop throughout the course of the year.