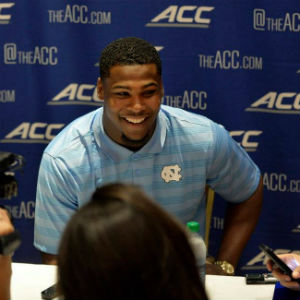 Q. Some disappointing moments last year from the defensive side of the football. Since spring practice, what have you thought about? What has the team worked on to get ready for opening day?

Q. Talk about the way this defense has evolved, replacing the guys that meant a lot but building on what you’ve got returning.

NORKEITHUS OTIS: Those guys meant a lot to us, but as a defense we’ve got to move on. We have a lot of guys that’s ready to step up, for example, you have Drennon who played D-ends, you also have Jesse Rogers who also plays end to try to put pressure on the quarterback. We lost Tim in the middle. We have some guys Nazair Jones, Greg Webb. We have a lot of guys that’s getting bigger, getting better.

Q. Who’s really challenged you up to this point when you talk about spring ball? Who do you feel has really pushed you offensively to get better defensively?

NORKEITHUS OTIS: I would say Jon Heck. He’s one of our tacklers. He’s been getting better each and every day he’s been working his craft, trying to be successful. I’d also say the offensive line as a whole because in our defense we kind of try to do different stunts, and they’ve been getting better and working hard.

Q. What did the bowl win do for you guys in the off-season as far as morale?

NORKEITHUS OTIS: I think the personality of our team now is everybody depends on each other. We play together as a unit. It’s not about me or him, it’s about us as a football team.

Q. Vic is an interesting guy. What’s it like playing for him?

NORKEITHUS OTIS: He’s a great guy. He teaches us the defense well. He wants everything to be fast. He wants us to play fast, play smart and play physical.

Q. Every coach will tell you you’ve got to take one game at a time, but if you look midway through the season scheduled, you see the Fighting Irish there at South Bend. Is that date circled in red for you?

Q. Personal goal for yourself this year?

Q. And have fun all at the same time, right?

Two suspects connected with separate inmate deaths inside Virginia Department of Corrections facilities have been indicted.