Game Notes: #3 UVA basketball on the road at #13 Notre Dame

The Atlantic Coast Conference announced today additional dates the Notre Dame football team will face conference opponents in future schedules. The Fighting Irish and Cavaliers are slated to meet three times between 2019 and 2024.

The No. 7 UVA men’s soccer team rallied for a 1-1 draw against Notre Dame Sunday afternoon at Klöckner Stadium.

The 15th-ranked UVA men’s soccer team won its third straight match, 1-0, over VCU Monday evening at Klöckner Stadium. Sam Hayward (So., Houston, Texas) scored in the 76th minute to push the Cavaliers (4-1) to the win. 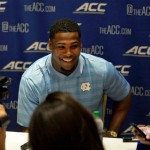 The fourth-ranked Virginia men’s tennis team advanced to the quarterfinals of the NCAA Tournament for the 10th consecutive year with a 4-1 victory over No. 13 Notre Dame Friday at the Henry Field Stadium at the Dan Magill Tennis Center.

The fourth-seeded UVa. men’s tennis team begins play at the 2014 NCAA Championships on Friday as men’s round of 16 play is held at the Dan Magill Tennis Complex on the campus of the University of Georgia.

UVa. jumped out to a 20-point lead in the first half and held off two Notre Dame runs in an impressive 68-53 ACC road win Tuesday night.

Notre Dame senior guard Eric Atkins has been named the Atlantic Coast Conference Basketball Player of the Week for the second week in a row, while the Fighting Irish’s Steve Vasturia earned ACC Rookie of the Week honors.

UVa. rallied from two goals down late in the second half to tie top-ranked Notre Dame, 3-3, Friday night before winning the penalty-kick shootout to advance to the championship of the 2013 ACC Men’s Soccer Championship at the Maryland SoccerPlex in Germantown, Md.

Todd Wharton (So., Glen Allen, Va.) scored on a penalty kick in overtime to lift the No. 10 Virginia men’s soccer team to a 1-0 win over No. 9 Wake Forest Tuesday evening in the quarterfinals of the 2013 ACC Championship at Spry Stadium in Winston-Salem, N.C.