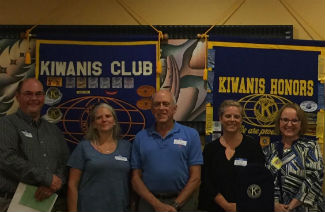 The Kiwanis Club of Waynesboro is focused on serving the children of Waynesboro and Augusta County. Some of its recent projects include support of Raising Resources for Readers that provides summer reading books to students at Wenonah and William Perry Elementary schools, the backpack program that supplies meals to students over the weekends, support of the Wayne Theater children’s puppet show, and much more. The club also sponsors service leadership clubs at Stuarts Draft Elementary School, Fishburne Military School, Waynesboro High School and Stuarts Draft High School.

The Kiwanis Club of Waynesboro meets the first and third Tuesdays of each month at noon at Panera Bread in Waynesboro. The club hosts an evening service project on the second Tuesday of each month at various locations around the community. For additional information on service projects how to join the Kiwanis Club of Waynesboro, visit www.waynesborokiwanis.com/ or find the club on Facebook.

Agriculture and forestry are still robust industries in Virginia despite obstacles presented by the pandemic.

The General Assembly’s passage of full funding for agricultural best management practices is a historic decision for farmers.