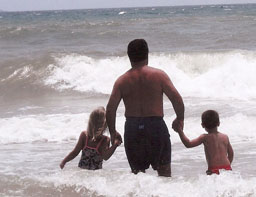 Want a real test of love? See how well your family relates to each other while being cooped up in a room together on a beach vacation as the rain beats against the windows facing the ocean.

Sooner or later, the grandkids, five-year old twins in our case, will start picking on each other and then their parents and if that doesn’t bring the desired response, move on to the grandparents.

Anna and I, along with our daughter Sara and family, were spending a week in a duplex right on the beach in the Topsail Island, N.C., village of Surf City (not the place Jan & Dean made famous). The place was small, nothing fancy, but adequate for our size group. The area is less commercialized and beach houses stretch on for miles. This is when a boardwalk, such as the traditional one that has rescued us many times in the past just one block away from our rental place in Ocean City, N.J., would come in handy.

We don’t have this option readily available here the several times the weather favored the local wildlife rather than us vacationers, so we work on alternative strategies to fend off familial stress disorder.

It helps to have a large flat-screen television in the living room area with a bazillion channels available on the cable system – some better speed-dialed through with big-eyed youngsters looking on – and the Disney Channel and UNC-TV public television system serving up some decent fare with high-definition images. There’s also a stash of DVDs on hand and a variety of board games. I play “Scrabble” for the first time in years – and lose to Sara (I was left stranded with the letters “Q” and “Z”).

The water is warmer and appears so much clearer here, largely devoid of seaweed and those nasty jellyfish that often invade the Ocean City beaches. This is only the third summer since 1975 that we didn’t make tracks to “America’s Greatest Family Resort.” It might be awhile before we return there.

The best part of each day: sitting on the deck overlooking the water, slowly imbibing that second cup of robust coffee and becoming mesmerized by the waves pounding the shoreline. A fisherman standing out in the surf when we’re just getting up and still casting his line when we call it a day tells me the rest of his family “likes to sit and read” on vacation, while he “has to be more active – might as well be fishing.” He filets and pan-fries his catch of the day – “nothing like it,” he smiles.

Speaking of which, we ventured out for supper one evening to a local seafood restaurant and I’ve have never been in a noisier eating establishment in my life. We paid too much for quite ordinary fare, but made up for it by finding an ice cream parlor nearby with a 50’s motif. I dropped a quarter into an authentic Rockola jukebox and watched the original Atco 45 disc plop onto the turntable. Walden Robert Cossotto, aka Bobby Darin, crooned his 1959 hit, “Dream Lover.”

By midweek I’m standing in the surf and telling myself I must be unwinding. I need to think what day of the week it is and, like the Chicago song inquires, “Does anybody know what time it is? Does anybody really care?”

Pretty, dainty shells with interesting markings cover the beach. I’d pick one up, thinking it’s a keeper, then find another that surpasses the appeal of the previous one. Grand kids Grant and Megan had a blast picking up shells and deciding which ones to keep. They had a bagful to haul back to Virginia by the end of the week. I even gathered my own small collection, which now decorates a bookshelf in the office.

I spent a major block of time in the pounding surf with the twins. I think both my arms were stretched a half inch, hanging on to trusting little fingers.

“Jump, Paw-Paw!” they’d cry, and then emit screams of delight as the waves smacked against them and eventually knocked them over. “Get all wet!” Grant ordered, and I’d comply. The water was so warm and felt good, even if the sand accumulating in my bathing suit didn’t. It was memory-building time; it’s a grandparent’s mission.

At first, I felt out of my comfort zone in this different vacation space, but my persistent spouse was right once again: “We need to check out new places – it’s an adventure,” she insists – and while it’s good to be safely back home, I’m so glad we heeded the clarion call to go down to the sea again.

Column by Jim Bishop. Submit guest columns, op-eds and letters to the editor at freepress2@ntelos.net.