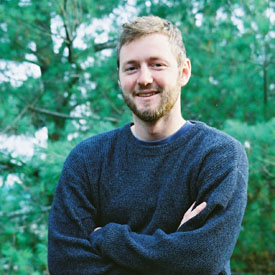 David H. Shenk is leaving his home in Harrisonburg for South America on Sunday, Dec. 5, and doesn’t expect to return for two years. It’s a long time to be gone, but he’s ready to put into action that which he feels prepared to do.

Shenk, 23, was born at Shenandoah Hospital in Woodstock, Va., and moved with his parents, Keaton and Betty Holsinger Shenk, to Harrisonburg when he was two. He attended Waterman Elementary, Thomas Harrison Middle School and Eastern Mennonite High School, thinking he’d end up in some kind of church-related service as he went on to Goshen (Ind.) College, but with little idea at the time what form it might take.

After one year at Goshen, he applied for work through a temp agency and ended up at Marshalls Distribution Center in Bridgewater.

“I found myself doing rather monotonous assembly-line work, but my fellow workers helped me make it interesting,” he said. “Most were from other cultures, many Hispanic, and while I knew little Spanish, but they were willing to open up to me, and over the course of the summer I learned a lot about what immigrant people deal with.”

Shenk spent the second semester of his sophomore year in the Dominican Republic on Goshen’s Study Service Semester (SST) program.

“This totally different experience confirmed my interest in Spanish culture and people,” Shenk said. He declared a major in Spanish with a minor in history. Following SST, he volunteered at a health clinic in Goshen and worked with Indiana Migrant Education, interviewing migrant workers and getting their children involved in education programs.

Six months of Shenk’s senior year at Goshen were spent studying as a university student in Mexico with Brethren Colleges Abroad.

He graduated from Goshen in 2009 and went to work in the neighboring city of Elkhart as executive assistant to the president of Inter-Cambio Express, a money transmitter company serving the Hispanic population. Shenk was one of only 3-4 persons from the U.S. among the company’s 70 employees.

Shenk feels these experiences blended together to lead him to explore service openings in Latin America with Mennonite Mission Network (MMN). Representatives of mission programs there connected him with the Quito Mennonite Church in Ecuador that was looking for someone to help with their ministries. The church was started and is led by Patricia Urueña and Cesar Moya, the parents of two of Shenk’s friends at Goshen.

While there are unknowns in the impending assignment, Shenk expects to divide his time between working with the church’s youth group and relating to refugees who are resettling in the area from neighboring Columbia. The Quito church started this refugee program in 2002 in response to the needs of Colombian families who were forcefully displaced by the violence in that country.

Shenk said that knowing the church family will help the adjustment process, but the refugee work “will be intense, since many persons have experienced a lot of trauma.”

He will live with his host family at first, then look for an apartment.

“In some ways there was no reason to leave my work in Goshen, but at this point in my life I feel if I’m able to use my training and God-given gifts to help people in need, then I’m ready to go,” Shenk stated.

The assignment is a joint partnership between MMN and Harrisonburg-based Virginia Mennonite Missions along with the Colombia Mennonite Church and Central Plains Mennonite Conference. Shenk will receive some subsidy, but has been working at fund-raising for the past six months.

“I needed to have 80 percent of the funding in hand or in pledges before I could get a visa and buy my plane ticket,” Shenk noted.

Shenk desires the interests and prayers of many people for the days ahead. One way this will be implemented is through a local support group from his congregation, Community Mennonite Church of Harrisonburg, who will encourage prayer and financial support and keep him in the corporate eye of his church “back home.” The church held a commissioning service for Shenk during its Nov. 28 worship service.

Anyone wanting more information on Shenk’s work in Quito or would like to contribute to his work there may contact Ken Horst at Virginia Mennonite Missions, 901 Parkwood Drive, 540-434-9727.

Shenk is taking on this new role in a new land with a verse from Micah 6:8 as his mantra – “And what does the Lord require of you but to do justice, love mercy, and to walk humbly with your God.”

“It’s somewhat ironic that I’m going to help persons who have been displaced from their homeland in part because of our country’s policies and military involvement in Colombia,” Shenk said. “I see this as an opportunity to do peacemaking and both learn from and reach out to and learn from displaced people there and share those learnings with the church and individuals back here.”

Jim Bishop is public information officer at Eastern Mennonite University. He can be contacted at bishopj@emu.edu.