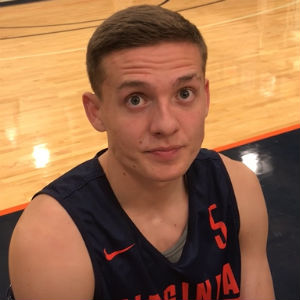 Kyle Guy, as a shooter, is dangerous. When the UVA sophomore guard becomes a scorer, he will be lethal.

“Sanchez has been on my rear end about, every time I catch it, look at the basket, and you will put the fear of God in somebody, because I can shoot it. So, definitely getting into the paint and getting fouled more is something I’ve been working on,” Guy said, referencing Virginia assistant coach Ron Sanchez, who we can only hope stays on Guy’s rear end about adding dribble-drives and a mid-range game to his arsenal.

Guy, a McDonald’s All-American in high school, lived up to the hype about his dead-eye shooting accuracy from behind the arc, hitting 49.5 percent of his three-point attempts as a freshman in 2016-2017, including three separate games with at least five made threes, most notably in the Cavs’ 53-43 win over eventual national champion North Carolina in late February.

But like a power hitter who either goes deep or strikes out, Guy was pretty much all-or-nothing as a frosh. He followed up a 20-point effort in a UVA win over Pitt at the ACC Tournament with a goose egg in Virginia’s loss a night later against Notre Dame, one of five games in which Guy didn’t score last season.

It basically came down to, if Guy wasn’t hitting the three, he wasn’t going to have much to contribute, a fact borne out by looking at his season numbers.

On the offensive side, Guy actually put up more shots from behind the arc (103, connecting on the aforementioned 49.5 percent) than he did inside the arc (102, shooting just 38.2 percent on those shots).

Guy only went to the free-throw line 35 times over the course of the 34-game season, and surprisingly shot just 71.4 percent from the line, after shooting 86 percent from the stripe as a senior at Lawrence Central (Indianapolis, Ind.).

Redick averaged 7.1 free-throw attempts a game in 2005-2006. You don’t get to the line that much jacking up a bunch of threes, as you get to see in looking at Staples’ senior season, when he averaged 3.3 attempts from the line, by far a career high for him.

Another key, as those who watch UVA basketball regularly know, is what Guy can do on the defensive end.

His ability of match up with opposing guards was a big factor in coach Tony Bennett’s decisions regarding playing time. He logged only nine minutes in a UVA loss at home to West Virginia in December, six minutes in a last-second loss at Villanova in January, and most memorably, just two minutes in an overtime loss at home to Miami in February that saw the ‘Hoos score just 48 points.

Guy has added 10 pounds to his 6’2” frame, now weighing in, according to the program’s media guide, at 175 pounds.

The extra muscle should help. A bigger help is a season and offseason in the program to pick up the nuances of the Pack Line.

“It’s just so much going on,” Guy said. “Especially as a freshman last year coming in, I didn’t know what to expect. It was just a lot coming at you, you have to remember everything, you have to hear all the calls, you have to know what every symbol means, all that stuff. It’s just a lot, and once you feel comfortable, it’s just repetition, and it becomes easier.”

I asked Guy at this point in our brief interview if the “light had gone off” in terms of his comfort in the system.

“I think toward the end of the year I was starting to get it, and over the summer, I felt a lot more confident. We’ll definitely see Nov. 10,” Guy said.

We’ll have a lot to be on the lookout for, on both sides of the floor, that night, and thereafter.