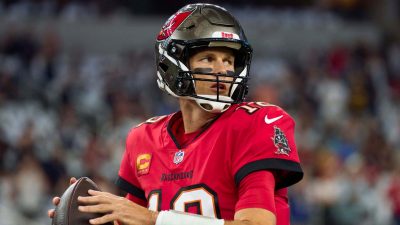 The Packers face off against the Buccaneers this weekend, and we have picked out some of our very own Tom Brady prop bets which can be backed along with a superb new customer offer from BetOnline – read on for more details.

How does $1000 in NFL free bets sound? We thought so. See below for more details.

Much of the talk surrounding this game is, of course, focused solely on Tom Brady and Aaron Rodgers in what may well be their final showdown in the NFL.

Crucial pass-catchers are absent on both sides of the field, and receiving/attempts will suffer as a result, seeing lower scores than both QB’s are used to. Tampa Bay’s point totals have been 22 and 30 for their first two games, and Brady has thrown just 61 attempts thus far across their opening two games, highlighting this may yet be a settling in period under Todd Bowles’ offensive set-up.

He has yet to surpass this week’s spread for passing attempts, and we don’t expect this to change against an aggressive Packers defense.

Next we are also expecting Brady to suffer when it comes to total passing yards, particularly given he has only averaged 201 per game so far after two games.

This has seen him in an unfamiliar 23rd overall in the league for passing yards – for context he finished first overall last season and will be vying to improve what has so far been a less than favourable start personally for the three-time MVP.

With the Bucs seemingly extremely shallow at receiver, we don’t expect him to come anywhere near the spread once more against what looked to be a stellar Packers defense in their crushing 27-10 win over the Bears in Week 2.

Share this page
Tags How to Bet on the NFL

Charlie is an experienced sports journalist with a strong background in football writing and the betting industry. Also a first class sports journalism graduate with an extensive portfolio featuring work with leading brands such as 90min and Checkd Media.

View all posts by Charlie Rhodes

10 Best Crypto to Buy Now as a Long-Term Investment, According to Crypto Experts