Why did Coach K abandon the zone, when it was working? 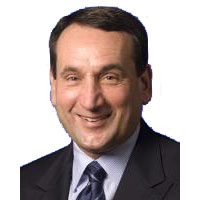 One thing I can’t figure out after the Duke-Virginia game: why Coach K went away from the 2-3 zone in the second half.

I was late applying for a credential, and thus not able to be among the gaggle asking questions after the game, and looking at the transcript, no one who was there dared to ask Mike Krzyzewski the question, so I have to raise it here without giving K a chance to defend himself, in a manner of speaking.

But, numbers are numbers. Virginia shot a modestly decent 44.8 percent in the first half en route to posting a 32-22 lead at the break. Then Duke came out of the locker room in the second half in the 2-3 zone.

You knew that at some point that was going to happen. Coach K has been trying to get his team to play man all season long, but when push has come to shove, and it has several times this season, he has resorted to going zone, a concession to the reality of having four freshmen playing the bulk of your minutes.

It doesn’t usually come until roughly the midway point, or thereabouts, of the second half, so when Krzyzewski went to it early, it was a sign that things were getting pretty desperate on the Duke sideline.

And then, it worked, spectacularly. Virginia, which as a matter of course plays zone teams well, couldn’t do much of anything against the Duke zone in the first 10 minutes.

The problem was Isaiah Wilkins, who UVA coach Tony Bennett was using, as he typically does, in the middle of the zone offense, the weak point of a 2-3 zone, where Wilkins, with his ability to hit the 12- to 15-foot jumper, is normally quite proficient.

Not so much on Saturday. Wilkins missed all three of his jumpers, had a turnover, and started displaying a tentativeness that seemed to spread to his teammates.

A fallaway jumper by De’Andre Hunter at the 10:14 mark cut the deficit to two, and it wasn’t long after that Coach K went away from his zone.

It wasn’t a personnel issue – Duke didn’t sub in the second half. And it wasn’t that Virginia was doing anything different. Hunter had started attacking, getting a couple of driving layups after the jumper, but it still seemed that Duke was dictating defensively with the basic 2-3.

Was it that Krzyzewski just wanted to prove a point to his team, that once it got the lead, it could hold it playing man?

With Duke going back and forth between its zone and man, Virginia shot 10-of-23 from the floor in the final 10 minutes.

Duke, meanwhile, after its torrid 12-of-16 start, shot 5-of-13 from the floor in the final 10 minutes, with the runouts created by the good D drying up, and the offense bogging down in the halfcourt.

Krzyzewski, after the game, talked about how it’s one game, how he wants his team to learn from the game, how the important games are in March, and he’s right on all counts. There’s a lot of basketball to be played.

But this one was his for the winning, and it’s pretty clear that it was his tactical maneuvering, on the brink of constituting hubris, that lost it.