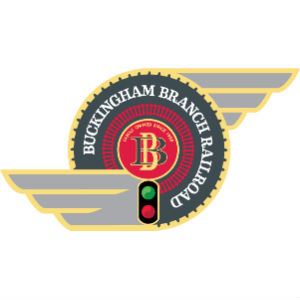 The Buckingham Branch Railroad is promoting the second national Rail Safety Week, which runs Sept. 23-29, with a Locomotive Banner Campaign across the commonwealth.

Operation Lifesaver, the national rail safety education nonprofit, is working in partnership with the U.S. Department of Transportation and other organizations to observe the second national RSW.  The theme of this year’s Rail Safety Week is “Stop Track Tragedies.”

Many Virginians live in close proximity to railroad tracks.  We cross them daily in our cars, on our bikes, and walking.  We can become desensitized to them, stop noticing them, and this can be fatal.  The BB hopes the locomotive banners will get the public’s attention, and remind and educate them about the hazards associated with trains. The ultimate goal of Rail Safety Week and the BB’s locomotive banners is to reduce collisions, injuries and fatalities at highway-rail crossings and prevent trespassing on or near railroad tracks.  There are ten different banner designs on six BBRR locomotives across the commonwealth.  They will be seen by thousands of Virginians from Norfolk to Virginia Beach, Richmond to Charlottesville, Crozet to Waynesboro, Staunton to Clifton Forge, Chase City to Burkeville, and dozens more towns and cities in between.

While the number of highway-rail crossing collisions, deaths and injuries has dropped over the past five decades, the numbers increased from 2016 to 2017, and it’s still a startling fact that about every three hours in the U.S., a person or vehicle is hit by a train. The goal of RSW and the BB’s Locomotive Banner Campaign is to raise awareness across our country of the need for rail safety education and to empower the general public to keep themselves safe near highway-rail grade crossings and railroad rights-of-way.

Together, we can save families and communities from these heartbreaking tragedies.