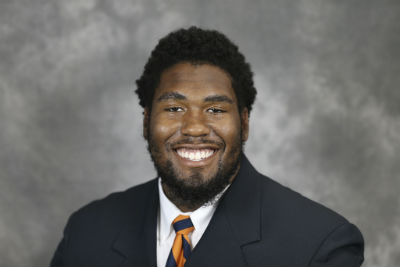 Jowon Briggs is in line to get his first career start at nose tackle as UVA prepares for its season opener at Pitt on Saturday.

Briggs, a four-star recruit, impressed in camp, dating back to the first practice of the summer, coach Bronco Mendenhall said on Monday.

“He’s strong, and he’s quick, and he’s smart, and he’s mature, and he doesn’t view himself through the entitlement process of recruiting. He’s unaffected by that,” Mendenhall said.

A key for Briggs, a 6’1”, 295-pound true freshman: “nothing has been too fast for him,” according to Mendenhall.

“The team likes him because he’s humble and hard working. He’s just exactly who we thought he was. That presence at nose tackle gives us a huge advantage over just where run stunts and pressure and pass emphasis can come from. There is a solidifying factor in there that the A gaps are handled,” Mendenhall said.

Briggs is part of growing depth on the defensive line. Mendenhall said Monday that he expects to use at least six players on the line Saturday night.

The top players on the ends in Mendenhall’s 3-4 are both seniors – Richard Burney at left end and Eli Hanback on the right side.

Junior Mandy Alonso is listed at the two spot at right end, with sophomore Aaron Faumui and Tommy Christ backing up Burney at left end, and sophomore Jordan Redmond listed as the backup to Briggs at the nose.

“We didn’t play many before because we didn’t have many to play. Right now, it’s so close, and there are so many that are comparable, and there are slightly different strengths, and so we’ll see some more situational usage and different bodies coming in,” Mendenhall said.

“Hopefully that allows us to be fresher, more physical, and play at a higher level up front than we have been able to do. This is new, and that’s something over our previous three years we haven’t been able to do,” Mendenhall said.