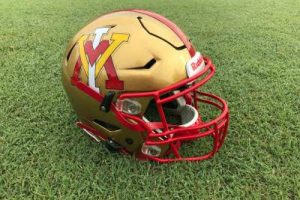 After a strong first half that saw the Keydets trailing by just a 14-6 score, the VMI football team lost by a final tally of 47-6 to host Army West Point Saturday afternoon at Michie Stadium in West Point.

The game was the first meeting since 2010 for the two military schools.

Despite the loss, VMI junior quarterback Reece Udinski finished with 22-for-34 passing effort and 218 yards. Udinski now has 10 200-yard passing games on the season, breaking the school record nine set by Al Cobb in 2014.

“I thought we came out and played extremely hard,” said VMI head coach Scott Wachenheim. “Going into halftime only down by eight points, I thought we had a great chance to win the game in the second half. Unfortunately, we got a couple of kids hurt and put some younger guys in some new positions and they took advantage of it. They are a very good football team. They executed very well today. But I’m proud of our kids and the way they fought. I’m looking forward to finishing the season next week against Chattanooga.”

In the 16th overall meeting of the schools, VMI (4-7, 3-4 SoCon), had a strong start beginning with a successful onside kick to begin the game recovered by sophomore DJ Dennis. The drive would lead to a 47-yard field goal by Clemons to give VMI the lead, 3-0.

Army responded with a four-yard touchdown run by Jabari Laws. After a VMI redzone stop and short-missed field goal by Army, the Keydets would capitalize with a Clemons 37-yard field goal to bring the game back within one point.

Another short touchdown, this time by Army’s Connor Slomka, extended their lead to eight points. An interception by VMI’s Warren Dabney stopped the Black Knights for a second time in the redzone to keep the game within one score at halftime.

Black Knights quarterback Kelvin Hopkins Jr. then ran for a 63-yard touchdown and Connor Slomka scored his third rushing touchdown of the day on an 8-yard run to extend Army’s lead starting the fourth quarter. Army’s Christian Anderson ran for 4-yard touchdown to end the game.

VMI returns home for the last game of the season next Saturday against Chattanooga at Foster Stadium. Kickoff is set for a 1 p.m. start and will be broadcast by Nexstar/ESPN3.