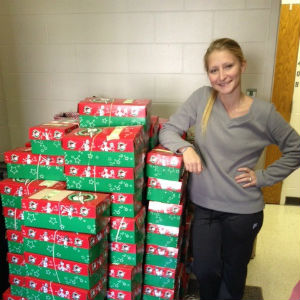 What began as a small family effort for one Virginia Tech student has now grown into a multi-campus outreach program.

Elizabeth Henry of W​illiamsburg, Virginia, a sophomore majoring in human nutrition, foods, and exercise in the College of Agriculture and Life Sciencesbecame active in Operation Christmas Child when she was 13 years old because of a touching personal experience she had with the program years before.

Born in Ukraine, Russia, Henry received her own shoe box from Operation Christmas Child when she was living in an orphanage. When adopted by an American family at age 13, Henry remembered the warmth she felt when she received one of these boxes.

Soon after, she decided that she wanted to become a part of mission of this organization.

“You have to share everything while living in an orphanage, and for the first time I had something that was mine. I was so happy,” said Henry. “I remember feeling hope and love. I didn’t feel alone anymore. I thought that someone out there cared enough to fill this shoebox for me and at that moment the world didn’t seem so bad anymore.”

For more than 20 years, Samaritan’s Purse, an international non-profit relief organization, has partnered with Operation Christmas Child to collect donations of shoe boxes filled with small toys, schools supplies, and toiletries for children in need across 135 countries.

This marks the fourth year for Henry’s project, and ten years since she herself received a shoebox.

Henry has collected more than 900 boxes over the past four years. She brought this project to Virginia Tech in 2013 as a freshman, and has received support from numerous faculty members and organization leaders including Fraternity and Sorority Life, sports teams, local churches, classes, and university administration.

Earlier this year, Henry contacted Antone Exum, the former Virginia Tech football player who now plays for the minnesota vikings of the NFL, about donating a box.

“I contacted him via Facebook and he was more than happy to fill a box. He dropped it off at a local church. Talk about Ut Prosim (That I May Serve)!” Henry said.

Henry asks for her professor’s permission to speak in front of her classes so she call tell her classmates about the organization and how they can help children in need.

Henry’s sister, Taylor Henry, is a student at George Mason University who advocates on her campus for students and faculty to donate to the organization. Between family and friends, the sisters have received donations from Old Dominion University and University of Virginia, and have even reached people in Florida and New York.

“My favorite part about participating in Operation Christmas Child is knowing that these boxes will bring joy to so many children. There is no better feeling in the world and there is no better reward than the joy I receive when I pack these boxes,” Henry said.