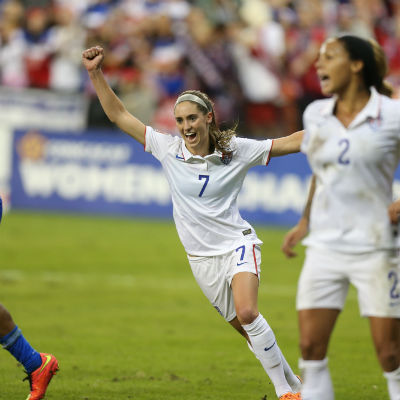 Virginia senior soccer player Morgan Brian (St. Simons Island, Ga.) was named as the 2015 recipient of the Mary Garber Award, given annually to the top female athlete in the Atlantic Coast Conference. Brian is the second Virginia athlete to be honored during the 25-year history of the award, joining women’s basketball standout Dawn Staley, who was honored in 1991 and 1992.

The Atlantic Coast Sports Media Association (ACSMA) votes on the Garber Award, as well as the Anthony J. McKevlin Award for the top male athlete in the ACC, given this year to Duke football player Laken Tomlinson.

In 2014-15, Brian became the fourth woman to repeat as the recipient of the MAC Hermann Trophy as national player of the year after tallying 10 goals and 14 assists during her senior season. Brian led the Cavaliers to their second consecutive NCAA College Cup as Virginia advanced to the championship game for the first school history. Brian was a three-time NSCAA first-team All-American and four-time first-team All-ACC selection. With 41 career goals and 43 career assists, Brian is the first Cavalier to be a member of the 40-40 club and ranks second in school history with 125 career points.

Brian is currently playing for the United States at the FIFA Women’s World Cup in Canada. She has made 33 career appearances for the national team, including four at this summer’s World Cup. Brian has tallied four international goals since her debut with the U.S. Women’s National Team two years ago. She was the overall No. 1 selection by the Houston Dash in the 2015 National Women’s Soccer League Draft and made her professional debut with the club in April.

Brian and the United States will play top-ranked Germany tonight in the FIFA Women’s World Cup semifinals. Game time at Olympic Stadium in Montreal is 7 p.m.

The ACC athlete of the year awards are given in memory of distinguished journalists from the region. McKevlin was a sports editor in Raleigh, North Carolina, and Garber, of the Winston-Salem (North Carolina) Journal, was a pioneer as one of the first female sports journalists in the nation.