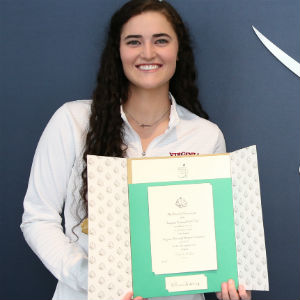 UVA women’s golfer Anna Redding (Concord, N.C.) has received an invitation to the inaugural Augusta National Women’s Amateur tournament. Announced last spring, the event will take place April 3-6 with the final round concluding the Saturday before the week of the Masters at Augusta National Golf Club.

Aside from the location(s), the structure of the 54-hole tournament makes it unique as well. All 72 competitors will play their first 36 holes on Wednesday and Thursday (April 3-4) at Champions Retreat Golf Club in Evans, Ga., before playing a practice round at Augusta National on Friday. Then on Saturday, the top 30 and ties from the first two rounds will play the final round at Augusta National.

Final-round coverage will air on NBC from noon to 3 p.m. ET.

The tournament winner will receive an invitation to the next five Augusta National Women’s Amateurs, the 2019 U.S. Women’s Open, the 2019 Women’s British Open, and any USGA, R&A and PGA of America amateur championships.

The World Amateur Golf Ranking was used to fill the next 60 spots, with the 30 top players from the U.S. not otherwise qualified taken and then the next 30 highest ranked players chosen based off the final list for 2018. The ANWA Championship Committee will fill the remaining spots via special invitations.

Redding is currently ranked No. 38 in the World Amateur Golf Rankings, which is 15th among U.S. players. She currently leads the UVA team with a 72.17 stroke average for four fall tournaments. She tied for first at UVA’s season-opener, the Mary Fossum Invitational at Michigan State and was fourth at the Tar Heel Invitational.

Last week Redding tied for third at the Harder Hall Women’s Invitational in Florida, one of the nation’s top women’s amateur tournaments. Last summer she reached the quarterfinals of the 2018 North & South Women’s Amateur Championship in Pinehurst.

Beyond broadcasting the final round, NBC Sports will provide pre-event promotion across NBCUniversal’s various platforms. Golf Channel, which broadcasts the Drive, Chip and Putt National Finals held at Augusta National the Sunday prior to Masters week, will show highlights and live reports during the first two rounds. Golf Channel’s “Live From The Masters” programs also will begin airing on April 5 from the course and continue through the final round of the ANWA and the DCP.