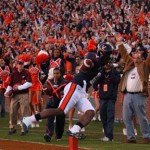 “Virginia Football: The Building of a Program” is an 18-part television series that will air on Comcast SportsNet Mid-Atlantic and online at VirginiaSportsTV.com and VirginiaFootball2010.com. Each episode will deliver an in-depth look at the building of the football program under first-year head coach Mike London.

The Virginia athletics department will produce the series in conjunction with the Emmy Award-winning NASCAR Media Group. The first episode will air on Comcast SportsNet Monday, May 17 at 9:30 p.m. Each episode will also be available online every Tuesday morning at 8 a.m. beginning May 18 at VirginiaSportsTV.com and VirginiaFootball2010.com.

“We hope this show will give people a unique perspective for what it takes to build a football program,” said Jon Oliver, Virginia’s executive associate athletics director. “The show’s format is inspired by the HBO Sports Productions ‘Hard Knocks’ and ‘Jimmie Johnson: The Road to Daytona.’ This series will allow fans to see the inner-workings of the organization and truly get to know everybody involved in the program. Coach London’s been very supportive of this project and we appreciate his willingness to allow the cameras into meetings, practices, and other team activities.”