The soldiers who stormed the beaches of Normandy on June 6, 1944, saw some of the most intense fighting of World War II. Among them on D-Day was Sergeant Robert L. Sales of Madison Heights, a member of the Virginia National Guard Company B, 116th Infantry.

U.S. Sen. Tim Kaine announced that his guest at tonight’s Presidential State of the Union Address will be Army Staff Sergeant Tammy Brown.

Monday morning, after hearing testimony from veterans, anti-gun violence experts, and victims of gun violence, the Senate Committee on Courts of Justice voted to reject SB 520, a bill that would have effectively created universal background checks for gun sales in Virginia.

U.S. Sen. Mark Warner, D-Va., comments on the announcement Thursday that former Republican National Committee chair Ed Gillespie will challenge him for the U.S. Senate in the 2014 election.

Mr. Speaker, Mr. President, Justices of the Supreme Court, members of the General Assembly, and my fellow Virginians. It is an honor for me to stand here tonight, before this great joint assembly, as the 72nd Governor of the Commonwealth of Virginia.

A same-sex couple’s inability to get a veterans’ home loan in Virginia has prompted U.S. Sen. Mark Warner (D-VA) to ask the Obama administration to move more quickly to eliminate discrimination in federal programs.

Dear Rep. Goodlatte: I have learned that you voted “yea” for the resolution, HJ 59, “Making continuing appropriations for fiscal year 2014, and for other purposes” which includes cutting my military retirement.

U.S. Sens. Tim Kaine (D-Va.) and Saxby Chambliss (R-Ga.) introduced the Servicemember Education Reform and Vocational Enhancement (SERVE) Act of 2013, a bill to improve the quality of educational programs for servicemembers and veterans and help them transition into the civilian workforce. 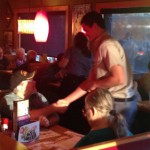 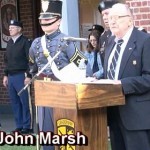 The threats faced today and tomorrow are different than any in the history of mankind, said former congressman, Secretary of the Army and National Security Advisor John Marsh in a Veterans Day address at Fishburne Military School in Waynesboro on Monday.

Americans are observing Veterans Day. Some will observe it with a day off from work or checking out the special Veterans Day sales that will be held in department stores. But the real meaning of the day should be to think about the great sacrifices of the men and women who deserve to be honored.

Last month, President Obama awarded the Medal of Honor to former Captain William D. Swenson, United States Army, for heroism and gallantry above and beyond the call of duty in the Battle of the Ganjgal Valley on Sept. 8, 2009. At the Department of Veterans Affairs (VA), we are honored to walk amongst, as well as work with, such heroes every day.

U.S. Sen. Tim Kaine announced the Servicemember Education Reform and Vocational Enhancement (SERVE) Act of 2013 at veterans events in Winchester and Richmond today. The SERVE Act, which is a companion to Kaine’s first bill, the Troop Talent Act, will improve the quality of education received by servicemembers and veterans.

In recognition of President Woodrow Wilson’s involvement in the formation of Veterans Day all veterans, active military members, and their families will be entitled to free admission to the Presidential Library and Museum on Monday November 11, 2013.

﻿After a back and forth contest throughout, a pair of fourth down plays late in the game made the difference as the #25 Charleston Southern Buccaneers eked out a 25-17 win over the VMI Keydets in Big South football action Saturday at VMI’s Foster Stadium. The contest was the Big South opener for both schools.

Speaking on the steps of the U.S. Capitol, U.S. Sens. Mark Warner and Tim Kaine highlighted the ongoing negative impact of the government shutdown in Virginia, and again urged House Republican leaders to re-open government, pay the nation’s bills on time and negotiate on a long term budget.

There is a memorial to soldiers overseas that says “when you go home, tell them of us and say, for your tomorrow, we gave our today.” That is what Memorial Day is all about. Each year we see World War II, Korea and Vietnam veterans gather on Memorial Day to honor their comrades who paid the ultimate sacrifice.

Country music artist Daryle Singletary will perform in concert at the Salem Civic Center as part of the Department of Veterans Affairs Salem VA Medical Center 2013 National Salute to Veterans on Tuesday, February 12, 2013, at 7:00 p.m.

Column by David Cox Submit guest columns: freepress2@ntelos.net As the General Convention goes about its business in Richmond, it’ll take up a matter that everyone voted for last time. Before they do again, I hope they’ll look at a better way of meeting their objective: helping disabled veterans. Last winter, the House and Senate […]

A vision for our veterans

Column by Randy Forbes www.forbes.house.gov Stay in Washington for a couple of weeks, and you’re bound to hear the phrase “on message.” Generally, the phrase is a reminder when speaking to the press or the public to keep your comments aimed in a singular direction. In the epicenter of national and global political debate, […]

As we honor the service of the men and women who have served our country, I wanted to provide you an update on things we have worked on in Washington to support our nation’s veterans once they return home from war. On this Veterans Day, I want to acknowledge my respect and appreciation for the […]