Rotunda Restoration begins at the Science Museum of Virginia

The Science Museum of Virginia begins restoration on the Rotunda dome this week as the building nears its 100 year anniversary.

The University of Richmond athletic department has announced the five name candidates for the men’s basketball team’s live spider mascot. Fans will now have the opportunity to vote on their favorite name for the only spider mascot in NCAA Division I athletics.

The Waynesboro Police Department has received credible leads that missing Waynesboro teen Brandon Wallace is at his mother’s residence in the vicinity of Columbus, Ohio.

Neither cold, rain, sleet, snow nor nightfall stops Carlos and Sherrie Taylor from getting their Christmas trees harvested and shipped to their customers.

Banner year? No prancing, no dancing is the theme with UVA basketball

UVA basketball is coming off, literally, a banner year: the first ACC Tournament championship since the Bicentennial, the first 30-win season since the early 1980s.

Do you like to get fancy on Thursdays? Well, we do. We are pleased to announce that on Thursday, October 9th, 2014, the Boys & Girls Club of Waynesboro, Staunton, & Augusta County will be hosting a “Gallery Show” fundraiser at 302 E. Main Street in Waynesboro from 7:30-9:30pm.

Charlottesville and UVA police are searching for a first-year University of Virginia student reported missing on Sunday.

Ellis Paul is one of those gifted singer/songwriters. Though some may refer to him as a folksinger, he is more, for lack of a better word, a singular storyteller.

The UVA women’s tennis team opened the 2014 fall season with three singles wins and a pair of doubles victories at the Duke Fab Four Invitational Friday (Sept. 12) in Cary, N.C.

Remarks by President Obama at 9/11 Memorial

Remarks by President Obama at 9/11 Memorial ceremony at the Pentagon. 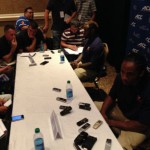 Assuming a Mark Warner re-election in November, and it seems safe to assume that, with the Democrat up 25 points in the most recent poll, from Roanoke College, on Republican rival Ed Gillespie, what happens from here on out for Virginia’s senior United States senator?