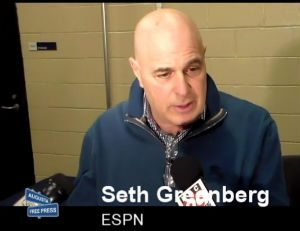 ESPN College GameDay is in Charlottesville, with Saturday’s clash between second-ranked UVA and fourth-ranked Duke the showstopper act to what promises to be a memorable day at the John Paul Jones Arena.

Seth Greenberg will be in the arena as an ESPN analyst with the GameDay crew. Four years ago, Greenberg had a different view of GameDay, on the sidelines as the coach at Virginia Tech, which hosted GameDay and a top-ranked Duke team at Cassell Coliseum in Blacksburg on Feb. 26, 2011.

“That was a magical moment for us,” Greenberg told reporters on the eve of the UVA-Duke game, as the Virginia basketball team went through a practice down the ramp from the media room at JPJ.

Having GameDay on campus is a “full-day infomercial for your university and your program,” Greenberg said, but UVA coach Tony Bennett and his squad need to keep their eyes on the prize.

“GameDay is a show. He’s got a game to coach. He’s got a team to prepare,” Greenberg said.

Thinking back to February 2011, Virginia Tech was unranked, but competing for positioning aimed at an NCAA Tournament bid, and ended up enhancing its resume with the 64-60 win.

The day was a bit of a blur, but Greenberg talked strategy in dealing with the madness that having GameDay in the house can bring.

“We were fortunate that our game was a 9 o’clock game. The show is over at noon, and I actually had our guys leave at 11, and we moved our shootaround time back later so they could get away from all the chaos,” Greenberg said.

The important thing to remember: “the show doesn’t help you win.”

“In the end, when that ball goes up, you’ve got to be ready to play. You can’t exhaust yourself in the morning and think at the end of the show that that’s it. It’s just the beginning,” Greenberg said.

From his analyst’s chair, Greenberg doesn’t think the UVA squad will have trouble keeping focus.