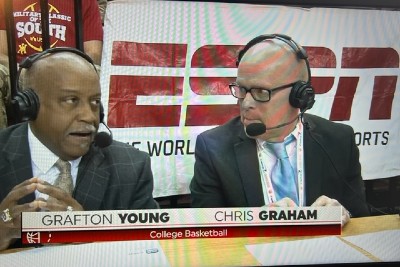 I filled in as the COVID emergency play-by-play TV guy on the ESPN+ broadcast of the VMI-East Tennessee State basketball game this past Saturday.

Biggest self-critique: I’m not good at going to commercial break.

Other than that, I was OK for a COVID emergency play-by-play TV guy.

In other words, Dan Shulman has nothing to worry about.

This one was my career triple crown broadcast. I’ve done college baseball for ESPN+ and ESPN3 for parts of six seasons, and two college football for parts of two seasons, around four seasons of VMI football on the radio.

I was a little nervous, admittedly, at doing basketball, not because I don’t think I have a handle on the sport, more because of the speed of the game.

Baseball and football have a slower rhythm, 30-40 seconds between pitches or plays from scrimmage, plenty of time to catch your breath, set the scene.

Basketball is pretty much non-stop, and with apologies to Tony Bennett, whose teams I cover as a web print reporter, VMI-ETSU promised a bit quicker pace.

The last lead change came with 36 seconds left on an and-one by VMI guard Trey Bonham.

ETSU had two chances to tie or take the lead in the final seconds, but the Keydets were able to close it out at the line.

It took me a few minutes at the outset to catch up broadcast-wise to the pace of the game, but I eventually got myself into a rhythm.

My broadcast partner, Grafton Young, a former assistant coach at VMI and ETSU, was a big help, having worked the past five seasons alongside the Voice of the Keydets, Wade Branner, who was on the sidelines with COVID, and texted me on Thursday to ask me to step in for him on the call.

In game, it was relatively easy to get into a flow, and I was decent coming back from breaks. Going into breaks is where I need work.

I never did adjust to having a producer in my ear counting me down from 10. I’m pretty sure I left dead air for three to four seconds going out, and I was obviously fumbling with whatever I was saying in the process.

That could come with repetition, if repetition is to come.

It probably isn’t, which is just fine.

If I never get to do TV play-by-play on another college basketball broadcast again, I got to do it once, and it was a glorious two hours.