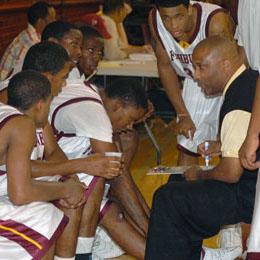 An 11-0 first-half run gave Fishburne a working margin over rival Fork Union, and the Caissons broke it open in the second half with a stretch of eight field goals in nine attempts en route to an easy 75-50 win in Saturday’s finale to the Virginia Military Postgrad Challenge.

It was nip-and-tuck for the first 15 minutes. A Bryce Douvier field goal made it 20-19 FUMA just inside the five-minute mark of the first half. A long three by Tab Hamilton gave FMS a 22-20 lead and ignited the 11-0 run. A Wes Carlson three at the first-half buzzer sent the teams to the locker rooms with Fishburne up 33-24.

A Larry Brown three a minute into the second half brought Fork Union to within 33-27. Then the game turned into the K.C. Whitaker show. A Whitaker three took the lead back out to nine. Whitaker scored 14 in the second half with four threes on his way to a game-high 23. The last of Whitaker’s buckets made it 65-41 Fishburne with seven minutes left.

Hamilton added 17 points for the Caissons, who went 1-1 on the weekend. FMS dropped a 62-60 nailbiter to St. John’s Northwestern Military Academy (Delafield, Wisc.) on Friday night.