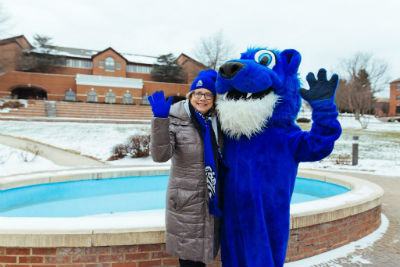 Eastern Mennonite University has announced the retirement of Herm, the school’s mascot, effective at the end of the 2019-20 academic year.

Known less by his official moniker of Herm the Fourth, Herm is completing his 22nd year as the biggest (and most loveable) fan and cheerleader of the EMU Royals.

“It has been a great honor to serve the EMU community for the past 22 years,” the silent Herm wrote in his resignation letter. “I will always cherish my time here, cheering on our Royals athletic teams, supporting this community’s amazing events, and frolicking on this beautiful campus.”

A nationwide search for the next Loyal Lion has already begun, with an anticipated start date of fall 2020. EMU officials plan to extend an invitation to Herm to meet the new member of the Royals pride at a “passing of the torch” ceremony.

The general public knows Herm from EMU sporting events, but he has also spread cheer and community, spirit and smiles at other EMU events such as Homecoming, LovEMU Day, new student orientation, residence life events, and really anywhere a happy Royal has been needed.

Herm wrote that many things had changed since he started at EMU in 1998, including his ability to keep up with today’s students.

“My speed and agility are no longer a match for today’s athletes, and with my limited tech skills I have fallen behind in my abilities to stay ‘hip’ with our student body,” he said with an ironically dated reference to current lingo. “I feel the time has come for me to walk away from the Royal throne and pass the torch to the next Loyal Lion in line for EMU. Thank you to all of the students, faculty, staff, and administration that have become great friends over the years.”

Herm will continue with his regular duties through June, with his final months also featuring a Virtual Appreciation Tour on EMU social media accounts. After that, Herm doesn’t have any plans other than to “take a hike in the Blue Ridge Mountains and hopefully enjoy some beach somewhere.” He also didn’t rule out taking up residence at any retirement communities near EMU’s campus.

“Herm, we will miss you!” said President Susan Schultz Huxman. “What an inspiration you have been for our campus community for kids and kids at heart alike. You gave me a great introduction to EMU in 2017, as we rode around in the golf cart all day and you introduced me to so many. Thanks for all the memories at sporting events, Fall Festival, LovEMU Day and more! We wish you well in retirement as you do … well, whatever blue lions do in retirement!”