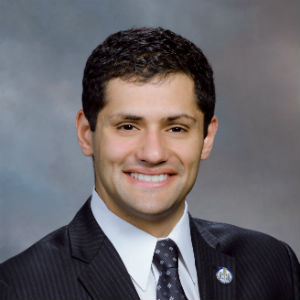 Roanoke Democratic Del. Sam Rasoul has joined others in denouncing comments made by Republican Party of Virginia treasurer Bob FitzSimmonds. Del. Rasoul is asking for an apology to be issued to the Muslim community and for Mr. FitzSimmonds to join him and other Muslim-Americans from Virginia at a roundtable discussion. The request comes on the tail of Mr. FitzSimmonds’ Facebook post responding to President Obama’s statements on the Muslim holiday of Eid al-Fitr.

Delegate Rasoul said, “It is enormously disappointing that such prejudiced words have been publicly stated by an officer of Virginia’s Republican Party. As a member of the Muslim-American community, I am both saddened and offended by Mr. FitzSimmonds’ claims that there have been no contributions to the fabric of this country or its democracy made by Muslims.

“I would firmly remind Mr. FitzSimmonds that the American Medical Association indicates that 10% of this nation’s physicians are Muslims. The designers of the Willis (formerly Sears) Tower in Chicago were Muslims. Brain tumors were extremely difficult to treat until Ayub Ommaya–A Muslim and U.S. citizen–invented a new method. Muslims can be found in every field from science to entertainment to art. One will find them serving the United States in the military, government, and all the other arenas that American citizens of all backgrounds participate.

“Mr. FitzSimmonds’ comments spread fear and hatred, and they belittle his fellow American citizens. I and the rest of the Muslim-American community here in the Commonwealth would appreciate an apology from Mr. FitzSimmonds. I would also like to invite him to a roundtable discussion with some members of Virginia’s Muslim community to discuss this issue in a constructive way and develop ideas to overcome divisive mindsets. America is one, its people are one, and we must work together to continue making this nation great,” concluded Delegate Rasoul.