What are organic e-liquids: Analyzing the future of vaping 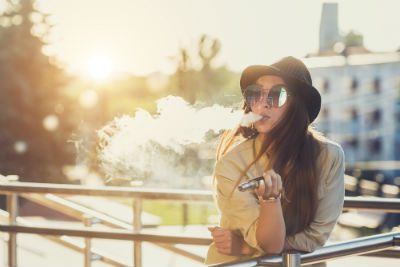 Although mind you, not all e-liquids contain nicotine. Generally speaking, however, e-liquids are mostly made of propylene, glycol, glycerine, and nicotine.

Now, What Are Organic Liquids?

Back when vaping e-liquids had only started to get popular, there was a remarkable amount of sub-par, unhealthy e-cigarettes on the market. These typically made use of low-cost chemicals and artificial sweeteners.

Nowadays, however, thanks to the substantial increase in market size, which itself brought about a significant amount of scrutiny from the public and the government, makers of e-liquids had to up their game, so to speak, by focusing on quality instead of volume.

And that is why organic e-liquids exists.

So what differentiates organic e-liquids from the non-organic type? The short answer lies in the fact that organic e-liquids contain e-juices that do not make use of synthetic substances such as propylene glycol and other unnecessary chemicals.

Instead of these chemical substances, organic e-liquids tend to focus more on ingredients that can be certified by the appropriate bodies as generally organic such as vegetable glycerine. Organic e-liquids are also becoming more popular with some stores specialising in them while stores such as Aqua Vape remains eclectic.

Organic liquids can be differentiated from their chemical counterparts in several ways. Before we continue, though, it is worth noting that numerous unscrupulous marketers tend to employ certain practices that tend to make differentiation almost impossible, an example of which is incorrect labeling and nondisclosure.

Generally speaking, however, the first way to differentiate between organic and non-organic e-liquids is to be on the lookout for the ingredients. Any e-juice which contains propylene glycol and chemical additives and artificial sweeteners are not organic, while those that contain vegetable glycerine without any of these two aforementioned ingredients are generally classified as organic.

Another way to differentiate is to look out for the presence or absence of a USDA certification. Organic e-liquids tend to have this while non-organic don’t.

The vaping industry is a very fascinating one, to say the least. Despite numerous challenges, the industry continues to move on, and many attributes this to the steps they’ve taken to mitigate the negative effects and address the solution as effectively as possible.

Some of these steps include continual adaptation and improvement in technology, the formation of bodies and associations to address issues on behalf of the industry, and most importantly the shift in product quality and composition from subpar chemical-dependent ingredients, to organic juices.

While all these steps are laudable enough, only time will tell whether they will be as effective as expected. For now, however, e-liquid lovers can relax and be grateful for the gift of organic e-juices.