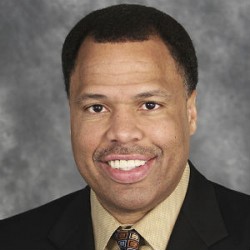 A familiar face is returning to roam the sidelines of the Vines Center as Director of Athletics Jeff Barber announced today the hiring of Ritchie McKay as Liberty’s head men’s basketball coach.

After spending the last six seasons working under Tony Bennett as associate head coach at Virginia, McKay returns to Liberty Mountain where he served as head coach during the 2007-08 and 2008-09 seasons.

McKay was welcomed back to Liberty today during an afternoon press conference held in the Club Pavilion of the Williams Stadium Tower.

Virginia advanced to the NCAA Men’s Basketball Tournament three out of the last four years. Following an ACC Championship in 2014, the Cavaliers were the No. 1 seed in the East Region and advanced to the Sweet 16.

Virginia has been one of the best defensive teams in the nation the last several seasons, including leading the nation in scoring defense the last two years (55.7 points allowed per game in 2013-14 and 51.4 points allowed in 2014-15).

The Cavaliers spent seven weeks ranked as the No. 2 team in the country this past season, finishing the year with a 30-4 overall record and a 16-2 mark in ACC play. Virginia advanced to the third round of the NCAA Tournament before losing to Final Four team Michigan State.

Prior to his days in Charlottesville, McKay served two seasons as Liberty’s men’s basketball coach, posting a 39-28 overall record and a 19-13 mark in Big South play. He was named the seventh head coach in program history on March 26, 2007.

The Flames were invited to play in the inaugural CollegInsider.com Postseason Tournament (CIT), advancing to the second round following a win over Rider.

McKay led one of the top scoring offenses in the Big South and ranked No. 48 in the nation, averaging 75.5 points per game during the 2008-09 season.

Smith was named All-Big South first team in 2009, one of two first-team all-conference student-athletes coached by McKay (Alex McLean in 2008).

McKay brought Seth Curry to Liberty and the rookie made an immediate impact on the program. He finished the year averaging 20.2 points per game and was named 2009 Big South Freshman of the Year (second player in program history to receive the honor).

Curry spotlighted McKay’s Top 50 recruiting class in 2008, which was ranked No. 48 in the country by Basketball Times.

Overall at New Mexico, McKay sported an 82-69 coaching record over five seasons. He finished the 2005 campaign with a 26-7 record, winning the Mountain West Conference championship and advancing to the NCAA Tournament.

The 1999-2000 season featured the first year of play for CSU in the Mountain West, and the Rams logged an 18-12 record and a fourth-place conference finish.

A pair of victories over nationally ranked opponents, the first time the program had accomplished the feat at Colorado State in a decade, and capturing the title at the second annual Pearl Harbor Classic in Hawaii were some of the highlights during the season. College Hoops Insider magazine noticed the success of the 2000 Rams and tabbed McKay as its MWC Coach of the Year.

Before arriving on the Colorado State campus, McKay began his head coaching career when he was named the head coach at Portland State. McKay started at Portland State in 1995, helping revive a program which had been dormant for 15 years. McKay led the program to nine victories in the school’s first season of competition (1996-97) since the early 1980s.

After the initial season at Portland State, McKay was named one of six finalists for the Clair Bee Award, given annually to the coach with the most influence and innovation in the game of basketball. Two other finalists for the honor that year were Dean Smith of North Carolina and Mike Krzyzewski of Duke. The 1997-98 Portland State team followed with a 15-12 mark and a third-place finish in the Big Sky Conference.

McKay started his basketball coaching career in 1988 as a graduate assistant at the University of Washington.

McKay followed his start with the Huskies with two years as an assistant at Queens College in North Carolina (1989-90), Seattle Pacific (1990-91), Bradley (1991-93) and back to Washington (1993-95). McKay also served as an assistant under Jim Molinari at the 1997 World University Games in Italy, where the USA captured the gold medal.

McKay earned his Bachelor of Arts degree in athletic administration from Seattle Pacific in 1987. A stellar player for the Falcons, McKay left the program as the school’s single-season and career record holder for steals, and he was third in career assists. He still holds the school record with 10 steals in a 1987 game against Pacific Lutheran.

McKay is married to the former Julie Summers. The couple has two sons, Luke and Gabriel and a daughter, Ellie, who is currently a sophomore at Liberty.