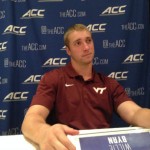 What does Virginia Tech do at quarterback?

Mark Leal has been a sort of quarterback-in-waiting at Virginia Tech, biding his time behind 2014 fourth-round NFL draft pick Logan Thomas the past three years, holding the clipboard, taking second-team snaps, always at the ready, just in case. 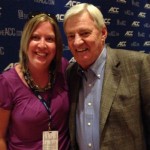 C.J. Brown stretched out to touch the ball to the pylon on a 3-yard run in overtime to lift Maryland to a shocking 27-24 overtime win at Virginia Tech on Saturday. The loss puts a serious dent in Virginia Tech’s ACC title hopes. Virginia Tech (7-4, 4-3 ACC) needs a win at Virginia in its season finale in two weeks and still will need some help to get to Charlotte.