The Staunton Augusta Waynesboro Tennis Association (SWAT) is hosting a Spring Membership Drive and Social on Sunday, May 22.

The No. 9 Virginia women’s tennis team rallied to claim the doubles point then stormed to three straight set victories on the way to a 5-2 win at No. 62 Syracuse.

The No. 8 Virginia women’s tennis team opened the ITA Kickoff weekend with a shutout victory on Friday, defeating BYU by a score of 7-0.

Virginia tennis fans are invited to enjoy an evening on the court with the UVA men’s and women’s tennis programs during Meet the Teams Day on Jan. 24. 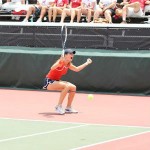 Virginia men’s tennis senior Ryan Shane (Falls Church, Va.) will be facing Jeremy Chardy in the first round of the US Open men’s singles main draw.

UVA tennis senior Julia Elbaba, a three-time All-American, is set to begin competition at the U.S. Open National Playoff Championships this weekend with a berth in the upcoming U.S. Open on the line should she advance out of this weekend’s event.