The following schedule is for games from Division I (FBS and FCS) for the dates of Aug. 26-27. Courtesy The National Football Foundation.

Different ways in which you can bet on football games

Betting on football is a lot about learning all the finer points of the game and staying constantly updated about the happenings in the football world.

The William & Mary football team will open its 2017 preseason camp with its first practice on Monday afternoon.

The following schedule is for games from Division I (FBS and FCS) for the dates of Dec. 2-3. Compiled by the National Football Foundation.

The following schedule is for college football games from Division I for the dates of Nov. 3-9, 2016. Compiled by the National Football Foundation.

The following TV schedule compiled by the National Football Foundation is for games from Division I (FBS and FCS) for the dates of Oct. 27-Nov. 2, 2016.

Of flags and football

The football hooligans are at it again but this time instead of street riots and violence, they are raising hell with flags and fundraisers.

UVA, having given up the entirety of a 28-point lead at home, took control in the fourth en route to a 49-35 win. 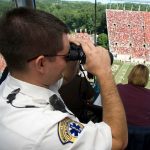 The Big South Conference announced its 2016 football broadcast schedule this week, and this year’s slate again features 11 games exclusively on ESPN3 and ASN.

VMI eager to get spring football drills under way

VMI will commence spring football drills Thursday, April 7 with a workout at Fiorini Field that will begin a busy week for the team.

The Virginia Historical Society announced that TowneBank will sponsor the next VHS special exhibition, Gridiron Glory: The Best of the Pro Football Hall of Fame.

What will it take to keep Kirk Cousins with the Redskins?

Redskins quarterback Kirk Cousins picked a good time to have a career year. With his rookie contract expiring, Cousins can now command almost whatever he wants.

Hell to the Redkins: Packers storm back, knock off Washington, 35-18

Washington surged to an 11-0 second-quarter lead, but Green Bay stormed back in the second half to eliminate the Redskins from the 2016 NFL playoffs.

Kirk Cousins threw for three touchdown passes in the first half, pushing the Washington Redskins to a 34-23 win over the Dallas Cowboys

Brad Cornelsen will be joining the staff of Justin Fuente at Virginia Tech as offensive coordinator, Fuente announced on Thursday.

Redskins blitz Bills, hold on to first in NFC East

Kirk Cousins threw for four touchdowns, and the Washington Redskins coasted to a 35-25 win over the Buffalo Bills on Sunday.

Baltimore Ravens smacked down by Seattle, 35-6

With Joe Flacco and Matt Schaub both out with injuries, the Baltimore Ravens had to turn to recently signed quarterback Jimmy Clausen to face Seattle.