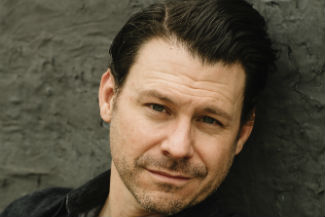 Director Blayne Weaver, who directed “Santa Girl” at Shenandoah, brings Hollywood know-how to the university as the school’s first director in residence.

“I’m honored to be a part of Shenandoah,” said the Louisiana native. “I love being around kids and people who want to learn. I think Shenandoah is really backing up its film department, which has taken some huge strides forward in the past couple of years, starting with ‘Santa Girl.’”

A resident of California, Weaver wrote, directed and starred in the award-winning thriller “Cut to the Chase” (with Lance Henriksen) and the acclaimed romantic comedy “6 Month Rule” (alongside Martin Starr, Natalie Morales and John Michael Higgins). Previous films he’s written and directed include “Weather Girl” (with Mark Harmon, Jon Cryer and Jane Lynch) and “Outside Sales.” He also co-wrote and acted in “Manic” (with Don Cheadle, Joseph Gordon-Levitt and Zooey Deschanel), which premiered at the Sundance Film Festival. To date, he has written eight feature films.

Weaver most recently wrote and directed “Santa Girl,” a holiday film co-produced by Shenandoah University and Los Angeles-based Capital Arts Entertainment that stars Hollywood actors Barry Bostwick and Jennifer Stone. Approximately 60 Shenandoah students were involved in the project, serving as a majority of the cast and crew.

“We just really wanted him here,” said Paul DiFranco, director of the film studio at Shenandoah University. “So much of the success of ‘Santa Girl’ is Blayne writing it, directing it, and posting it. We want him here as long as possible.”

Weaver began his work as director in residence this week. He will teach a couple of courses in directing and screenwriting and also focus on ways to improve Shenandoah’s film program. One of his main tasks is shepherding a new “Lifetime-style” project that he wrote called “Bad Student.” The goal is to try to finance the film through Capital Arts Entertainment and employ the help of Shenandoah students.

“It’s about us sitting down and making a list of our assets,” Weaver said. “What kind of talent are we looking at, what are we doing, and can we bring in an L.A. production company or do we do it solo?”

The director in residence is a one-year position. Shenandoah University has an enrollment of about 4,000 students.

Weaver arrives at Shenandoah as “Santa Girl” takes off nationwide. Gravitas Ventures, a Red Arrow Studios company, announced in June that it had acquired worldwide rights to the movie, excluding Germany. Founded in 2006, Gravitas connects independent filmmakers and producers with distribution opportunities across the globe.

“We’re really thrilled to be working on this charming holiday film,” said Nick Royak, manager of acquisitions at Gravitas Ventures, in a June 10 news release. “Blayne Weaver and his team have put a really fun modern spin on Santa and his family; they’re an entertaining bunch we can’t wait for audiences to meet.”

Starting on Aug. 30, the holiday fantasy will run for one week in Los Angeles; Dallas; Orlando; Washington, D.C.; Seattle; Cleveland; and Minneapolis. It will also be available on-demand starting Aug. 30. On Sept. 6, it will premiere in Boston and Detroit for one week.

Alamo Drafthouse Cinema in Winchester will also premiere the movie on Aug. 30 and plan to run one showing a day for a week. Special screenings will be held at 5 p.m. and 6 p.m. Aug. 31 with a Q&A with Weaver to follow.

The movie tells the story of how Santa Claus’ only daughter, Cassie Claus, goes off to college while trying to keep her magic powers and famous father a secret. At school, Cassie is pursued by two boys: sweetly awkward Sam and handsome and wealthy J.R. As her impending arranged marriage looms to the son of Jack Frost, Cassie struggles with her feelings for Sam and her obligation to her father and Christmas.

“Our goal at Shenandoah University was to educate students by doing,” said DiFranco. “We wanted students to experience working on and acting in a commercial feature film, going beyond the ‘student’ filmmaking model. We think we accomplished that with ‘Santa Girl.’ We feel this establishes the Shenandoah University film department as one of the most unique programs in academia. Capital Arts has informed us that they would very much like to make another feature film with us. That, to me, is a sign of true success.”