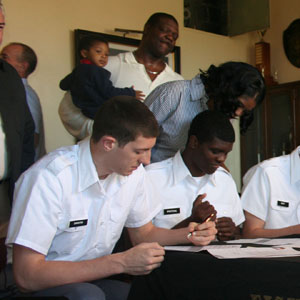 “Remember what you did to get here,” coach Ed Huckaby said at a signing ceremony held at the Waynesboro prep school.

The student-athletes and their parents were busy signing various bottom lines. “The last time I signed my name that many times was when I bought a house,” said Marianne Simonton, whose son, Will, a 6-11 center, signed with Illinois-Chicago.

Beside the Simontons was Keith Armstrong Jr., a 6-7 power forward from Raleigh, N.C., who signed with Robert Morris.

“I’m very proud of Keith. He works very hard. I know that Robert Morris is where he really wanted to go. I’m very happy that he’s moving toward achieving his goals,” said his mother, Kia Armstrong.

Dad, Keith Sr., said signing day was something that he had been expecting for his son since he first started playing basketball as a preteen. The hard part was wrapping his head around the idea that his son needed a year of postgrad basketball to get to the next level.

“He had a very good senior year. But I think because he was a young senior, it came to me that what we should do is let him mature a little bit more. This was a perfect opportunity for him,” Armstrong Sr. said.

Huckaby’s experience as a D1 assistant helped sway Armstrong to spend a year in Waynesboro.

Just surviving the preseason on a team with nine D1 commits is an accomplishment in itself.

“It’s a big change for me. HIgh school was nothing like this,” said Simonton, a Falls Church native. “It’s amazing what we have to go through here every day. Preseason was a grind. People were banged up, nicked up every day trying to get through. It’s incredible how competitive this team is. You look at it like it’s hard, but it’s worth it.”