get into the habit nunsense opens at the wayne theatre
Local

Get into the habit: Nunsense set for two-week run at The Wayne Theatre

For nearly 40 years, “Nunsense” has made audiences laugh.

Tonight, the show opens at The Wayne Theatre in downtown Waynesboro and runs this weekend and next weekend.

A nun accidentally kills a majority of her fellow nuns and asks a group of other nuns, including the Rev. Mother Superior, to assist her in burying the bodies and the crime.

The theater production’s book, music and lyrics were written by Dan Goggin. First performed off-Broadway in 1985, “Nunsense” was so successful that Goggin wrote a sequel production.

“It is an absolutely silly, fun, light-hearted musical comedy,” Lesley Larsen, the show’s director and The Wayne’s Artistic Director for three years, said.

The Wayne Theatre just held a production of “Dial M for Murder,” but with the holidays coming, Larsen said “Nunsense” “felt like a really good fit” and “nothing but a breath of fresh air.”

The show also offers opportunities for a wide age variety of women on stage and “channels the female presenting power.”

“Nunsense” provides audiences with a unique interactive show opportunity and a live band onstage as part of the performance. Larsen said the actors make a goal of focusing on each member of the audience at some point during the performance so everyone feels seen.

“What I especially like about what the sisters do onstage is they kind of represent, they literally call each other sister, and I think that kind of created family is an important reminder, especially as we go into the holidays,” Larsen said.

Larsen said the show is a time to reminisce, treasure and hold dear those who have been influential in our lives, just as these nuns are influential in each other’s lives.

With the song “Growing Up Catholic,” the hope is that someone was there in an individual’s life to redirect or encourage them on the right path.

“That’s what I take from this show is that strong reminder [of that support system],” Larsen said.

Audience members will meet the nuns before they are on stage, and will be quizzed by one of the nuns about what happened before the show began.

To prepare for her role as “Sister Mary Hubert,” Heather Harlow of Waynesboro said she researched Catholicism and life as a nun, and also watched online performances of the show. 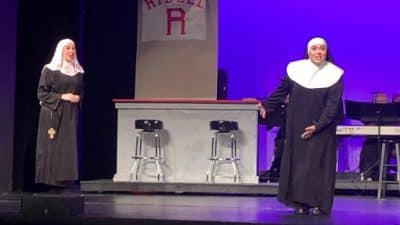 Harlow got into theater as an actor in her about 10 years ago when she performed in a church play. “Nunsense” is her fourth show at The Wayne.

She said she hopes that audience members will “just enjoy themselves.”

“It’s hysterical. It’s a great opportunity to really laugh and escape,” Harlow said of the show.

A seasoned actor who did national tours, Kim Reiter of Staunton portrays the Rev. Mother Sister Mary Regina. She previously portrayed Sister Robert Ann years ago. She said the difference between the roles is that Sister Mary Regina does less dancing, but is still kept on her toes by taking care of the other nuns.

“The music is just fun,” Reiter said. “And the lyrics are really clever.”

She said she wants the audience to relax and feel good when they see the show and when they leave the theatre after the show.

“Nunsense” is a show that needs an audience, and Reiter and Harlow are ready to interact with audiences this weekend and next weekend.