Matthews: We play for championships 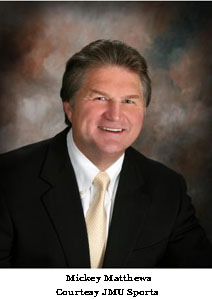 A reporter once asked the legendary Bear Bryant, So, Coach, you’re not playing well. Is there any controversy on your team?

The bad news is the Dukes were 6-5 in 2009, a year after reaching the national semifinals and sending already high expectations through the roof for the ’09 campaign. The good news, if there can be good news with a 6-5 finish, is that JMU won its final four to get to 6-5.

“That was huge for us,” senior quarterback Drew Dudzik, who entered camp as the starter after a spring that Matthews said left it clear who his #1 guy should be. Dudzik said a group of senior leaders on the team met in January to talk about the ’09 season and set goals for ’10 and set their teammates on the path to working hard to avoid a repeat of the pain of last season.

“The way we ended last season was a definite momentum boost,” said Dudzik, who will be backed up by talented sophomore Justin Thorpe.

“It was the right decision. Drew is a senior and a leader on this team. Our job is just to go out there and produce,” Thorpe said. “We see the talent that we have on the team. We have tremendous weapons. We just need to go out there and make plays.”

It was, uncharacteristically, of late, the JMU offense that was the issue in 2009. After leading the nation in scoring in 2008, the Dukes put up just 22 points a game in 2009. JMU’s defense improved dramatically from its effort in 2008, knocking more than 1,000 yards of total defense off its ’08 total in ’09, and it was the D that kept Madison in games last year.