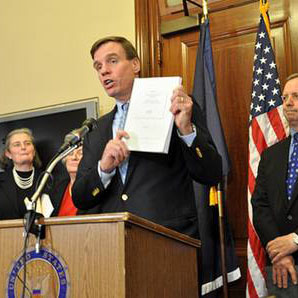 I would like to share some very positive news on our continuing efforts to fix what’s broken at Arlington National Cemetery.

It was last June when many of us first heard about Arlington’s reliance on paper records and maps, and the systemic disorganization and shameful errors that inevitably resulted. I think all of us were especially shocked and appalled to learn about dozens of instances of misplaced or misidentified remains at the cemetery.

As an American, a Virginian, a member of the Senate and as the proud son of a World War II Marine veteran, I thought it was important to take action to try to correct these problems.

So last August, we announced a unique agreement with the Army. Several of our leading Northern Virginia technology companies assigned their brightest problem-solvers to work with the Army to honestly assess the back office disaster at Arlington, and recommend a responsible path forward.

We already knew that Arlington Cemetery officials were relying on hand-written files, paper maps and 3-by-5 index cards, which was an entirely inadequate system for responsibly tracking the 300,000 military heroes buried at Arlington and the 6,000 military funerals conducted there every year.

As a result of this assessment, we now know there were other disappointing management issues at the cemetery:

Now, it is clear these management issues and workflow challenges existed at Arlington National Cemetery for years, even decades – and they certainly won’t be solved overnight.

But this business plan [pdf] prepared by members of the Northern Virginia Technology Council provides the Army with a clear roadmap to bring Arlington National Cemetery into the 21st Century digital age.

If implemented correctly, these recommendations will honor the sacrifice of those men and women who are buried at Arlington. This business plan also will go a long way towards restoring the faith and the confidence of those families who have entrusted the remains of their loved ones to Arlington.

An assessment of this quality and depth typically would cost a client hundreds of thousands of dollars, but it is important to note that these Virginia companies and NVTC provided this public service for free. I want to publicly thank them for this great example of corporate citizenship.

The Army already has replaced the management team at Arlington, and Army leaders say they have taken preliminary steps to address several of the problems identified in this report.

But let me be clear: my interest in fixing what’s broken at Arlington does not end today. I consider it my responsibility to stay focused on these issues, and to continue to press the Army to follow-up quickly and appropriately, so that we can put this disappointing chapter behind us.

Warner, a former telecommunications executive and Virginia governor, serves on the Senate’s Banking, Budget, Commerce and Intelligence committees. He can be reached at www.warner.senate.gov.