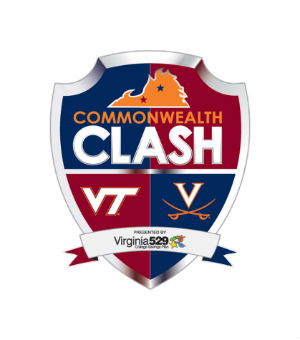 Commonwealth Cup Up For Grabs Friday in Blacksburg
• Virginia and Virginia Tech will play a nationally-televised game on Friday night on ESPN. Kickoff is
scheduled for 8 p.m. at Lane Stadium.
• The winner of this game claims the Commonwealth Cup for the next year and secures bowl eligibilty. A win would make Virginia bowl eligible for the first time since 2011.
• After holding the trophy following wins in 1997 and 1998, the Cavaliers have taken it just once since then (2003) with the Hokies winning 14 of the last 15 meetings.
• The award was started for the 1996 game between the two state foes, with the Hokies receiving the trophy for the first time with a 26-9 win.
• The Cup is made of marble and cherry wood, stands four feet high and weighs more than 100 pounds.
• The scores of all 95 games in the rivalry are engraved on the sides of the trophy.

Coaches Familiar With Rivalry
• Five UVa coaches are veterans of the Virginia-Virginia Tech rivalry.
• UVa defensive coordinator Jon Tenuta and wide receiver coach Marques Hagans are Virginia alums.
• Tenuta was part of three Commonwealth Cup games (1978-80). UVa won the 1978 (17-7) and the 1979 (20-18) meetings at Scott Stadium, but lost the 1980 (30-0) meeting in Blacksburg. Tenuta had three tackles and broke up two passes in the 1980 game.
• In UVa’s last win in the series (2003), Hagans caught five passes for 43 yards and made one rush for 17 yards.
• Graduate assistants Sean Cascarano, Jacob Hodges and Clint Sintim are also Virginia alums and played in the Virginia-Virginia Tech rivalry.
• Sintim made eight tackles in the 2008 game at Lane Stadium and had 10 tackles, including 3.0 sacks in the 2007 game .
• Head coach Mike London was a UVa assistant coach during the 2001-04 and 2006-07 seasons, with the Cavaliers going 1-5 during that span, including a victory in 2003. He is 0-4 as a head coach against Virginia Tech.
• Virginia Tech head coach Frank Beamer was a varsity defensive back for the Hokies from1966-68. He made his first start in Tech’s 1966 game against Virginia, a 24-7 Hokies’ victory.

32 is Virginia’s Magic Number
• Scoring plenty of points against the Hokies means good things for the Cavaliers.
• Virginia has scored at least 32 points in each of its last seven series wins dating back to 1989.

Virginia In Season-Enders
• This game is the Cavaliers’ final regular-season contest of the 2014 season.
• UVa is 44-76-4 all-time in regular-season finales and has lost its last nine.
• This is the ninth straight year and the 20th time in the last 24 seasons Virginia has closed the regular season against the Hokies.

Last Blacksburg Meeting: 2013 (VT 16 – @UVa 6)
• All the scoring came in the first half on a frigid day at Scott Stadium.
• Trey Edmunds took a short pass 26 yards for a first-half touchdown and Eric Kristensen kicked three field goals to lead Virginia Tech.
• Alec Vozenilek kicked two field goals for Virginia.
• Kevin Parks rushed for 105 yards to surpass the 1,000-yard mark for the season.
• SS Anthony Harris missed the first half due to being ejected the week prior because of a targeting penalty at Miami.