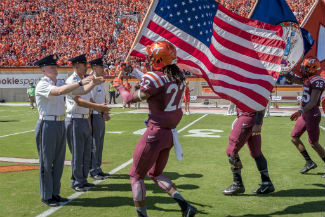 Cadet John Mitchell, at left, reaches for the American flag at the start of the Sept. 24, 2016, game against East Carolina. To his right are cadets Abdel Hammad and Paul Pechie. Today, all three are juniors in the corps.

When you’re in Lane Stadium this fall and getting ready to jump to “Enter Sandman,” take a moment to look toward the 30-yard line. There, you will see three Virginia Tech cadets, standing at attention.

“I remember the excitement of standing on the field while the football team ran toward me and the crowd was screaming and jumping,” said cadet Madison Schickel of Fredericksburg, Virginia, a sophomore in Naval ROTC-Marine Option majoring in computational modeling and data analytics in the College of Science. “The feeling was exhilarating.”

These cadets — first-year students for all home games and upper-class students for all away games — were chosen for this special duty to recognize their outstanding performance with the Virginia Tech Corps of Cadets.

Three football players, also selected because of their performance in the last game or during practice, will lead the football team onto the field while carrying the American flag, the Virginia flag, and the team’s spirit flag. They take the flags the length of the field and deliver them to cadets.

The cadets salute the flags, then securely carry them off the field.

The program is part of the proud partnership the Virginia Tech Corps of Cadets has with the Virginia Tech Athletic Department and the Virginia Tech football team and offers a unique opportunity to recognize key steps on a cadets’ leadership development path, said Maj. Gen. Randy Fullhart, commandant of cadets.

Cadet Madison Schickel, at far right, waits to receive a flag from the football players at the start of the Sept. 9, 2017, game against Delaware.

Schickel was one of three cadets chosen for the first home game of the 2017 football season, called out for her teamwork and her willingness to volunteer for tasks as a new cadet.

“The flag cadets are chosen based on merit within the corps and its companies, so I was really honored that I was chosen,” she said. “After a couple weeks of being a freshman cadet and following orders to a T, getting recognized for all the work I had put in made me feel great. Also, being able to represent the corps in such a great Hokie tradition was great.”

Cadet Austin Hill of Mooresville, North Carolina, a senior in Naval ROTC majoring in criminology in the College of Liberal Arts and Human Sciences, traveled with the football team to East Carolina University last year. He was recognized for being a role model and mentor for cadets in Delta Company, one of 12 units within the corps.

“What I remember most was how at home the football team and staff made me feel,” Hill said. “They all truly seemed to care for the corps and what it stands for.”

This semester, as the commander of Delta Company, Hill will continue the flag cadet tradition by recommending cadets under his command for the honor.

“It means the world to me to be able to allow high-performing cadets a chance to have the same positive experience that I did,” he said. “It really helped me understand views on the corps and what the Hokie nation is all about.”