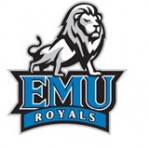 Eastern Mennonite hosted Stevenson Tuesday afternoon, and with the wind gusting out to left field in a non-conference matchup, the offenses were running in high gear. The two teams combined for eight homeruns and 37 hits in the nine innings. Eastern Mennonite had five of the long balls and rode them to a 21-17 win over the Mustangs.

Stevenson got on the scoreboard first with a grand slam in the top of the first. But the Royals unleashed an eight-spot in the bottom of the frame, aided by five Mustang errors, and never gave up the lead. Dylan Smith (Sterling, Va./Park View) had a two-run single and Cody Davis (Goodview, Va./Staunton River) added a two-run homerun, his first of the year.

The visitors scored two runs in their next at-bat off a walk and a pair of hits, cutting EMU’s lead to 8-6. The men had the answer again in the bottom of the frame, bringing in another four runs on the strength of back-to-back-to-back homeruns from Ben Wise (Staunton, Va./R.E. Lee), Aaron Martin (Harrisonburg, Va./Eastern Mennonite) and Daniel Martin (Harrisonburg, Va./Eastern Mennonite).

Both starters wore out early. Stevenson’s starter was chased in the second and EMU’s Pat Crowe (Mickleton, NJ/Kingsway Regional) lasted into the fourth. Stevenson got within three runs at 13-10 before the Royals strung together five hits in the fourth and pushed the lead back up to 19-10. The big swing came from Jake Norman (Fredericksburg, Va./Colonial Forge) who shot a three-run bomb over the right field wall.

The Mustangs added a three-run homer in the seventh and added three more in the ninth, but EMU never gave up the lead in a 21-17 win.

Eastern Mennonite relentlessly attacked the Stevenson pitchers, as the Royals went through their batting order six times in eight offensive innings. The men finished with 19 hits, eight walks, and a couple of hit batsmen. The visitors didn’t help themselves by committing seven errors.

Crowe pitched three-plus innings and was charged with nine runs. Freshman Jon Trice (Stuarts Draft, Va./Stuarts Draft) allowed four runs in 3.2 innings of relief work and picked up the win to go to 1-0. Thomas Worley (Prince George, Va./Prince George) had to come in to squelch a ninth-inning rally and picked up his first save in 0.2 innings of work.

The Royals improve to 8-13 on the season and are 3-10 in the Old Dominion Athletic Conference. EMU plays single road games at Washington & Lee on Wednesday and Shenandoah on Thursday. The men return home for a rescheduled doubleheader with Emory & Henry Sunday.