how to bet on stanley cup 2022 bc sports betting sites

How to Bet on Stanley Cup 2022 | BC Sports Betting Sites

BC sports betting has become easier now than ever before with single-game wagering recently becoming legalized in the province of British Colombia. Find out how residents can bet on Stanley Cup 2022 in BC and claim free bets for the Stanley Cup Finals. 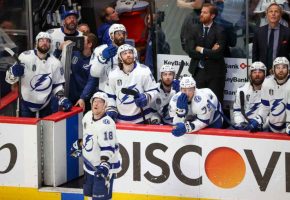 The 2022 Stanley Cup Finals shifts to Tampa Bay for Game 3 on Monday night, as the Tampa Bay Lightning will look to avoid going down 0-3 in their best of seven series against the Colorado Avalanche. The Lightning are coming off an abysmal 7-0 loss to the Avalanche on Saturday night in Denver. A game that saw the Lightning put just 16 shots on Darcy Kuemper, while the Lightning’s star goalie Andrei Vasilevsky got lit up for 7 goals on 30 shots.

How to Bet on the Stanley Cup Finals in BC

The Best BC Sports Betting Sites for the Stanley Cup Finals

The Tampa Bay Lightning finished the regular season in third place in the Atlantic division with 110 points and a 52-23-8 record. The Lightning opened the playoffs as underdogs in their first-round series against the Toronto Maple Leafs but managed to defeat the Leafs in seven games with back-to-back wins in the last two games of the series.

The Lightning join the (76-80) Montreal Canadiens and the (80-84) New York Islanders as becoming just the third team in NHL history to have won seven or more straight playoff series. With this year’s Stanley Cup finals appearance, the Lightning becomes the first team since the (83-85) Edmonton Oilers to advance to the Stanley Cup finals in three consecutive seasons and will look to become the first team to win three straight Stanley Cups since the New York Islanders did it in 1982.

As for Colorado, the Avalanche finished the season with the best record in the NHL’s Western Conference, finishing the year with 119 points and a 56-19-7 regular-season record. The Avalanche opened their playoff run as the +325 betting favorites to win the Stanley Cup, and have held up to their expectations across each series in the lead-up to this year’s Stanley Cup finals.

After taking a 2-0 series lead, the Colorado Avalanche are the massive betting favorites to win their third Stanley Cup in franchise history and their first since 2001.

For full betting odds on the 2022 Stanley Cup Finals via BetOnline, check out the table below.

The Best BC Sports Betting Sites for the Stanley Cup Finals

BC sports betting fans can bet on the Tampa Bay Lightning or Colorado Avalanche in a number of different NHL betting markets. If you’re brand new to NHL betting in BC or don’t know much about hockey in general, don’t sweat, we’ve got you covered.

Scroll down to find out the top BC sportsbooks available for the 2022 Stanley Cup Finals.

While the Lightning are in tough against the best team in hockey. The series will shift back to the friendly confines of Amalie Arena on Monday, with a chance for the Bolts to notch their first win in the best of seven Stanley Cup final.

Tampa Bay is no stranger to being down in playoff series, with the two-time defending Stanley Cup champions having bounced back against the Toronto Maple Leafs in round one, and against the New York Rangers in the Eastern Conference finals.

As the old saying in hockey goes, your team isn’t in trouble until you lose a game at home. The Lighting have a chance to keep their heads afloat in this series on Monday, and at the current odds long-shot of +445, it’s never a bad bet to back the defending champs in a seven-game series.

Click below to bet on Stanley Cup 2022 in BC for free by claiming free bets from BetOnline.

View all posts by Alexmac

APTOS Price Prediction – It is all over for APT. These are the investments you need now

What is BRISE crypto and why you should buy it along with these new assets!

What is SERUM and why it is seeing a 50% price cut.

Women’s Basketball: Virginia holds off Minnesota, wins, 73-70, to improve to 7-0

Virginia had to hold off a late Minnesota charge to close out a 73-70 win in the opener of the 2022 Cavalier Classic on Saturday.

ODU’s 2022 football season started with promise with a stunning win over Virginia Tech. It ended with a thud in a 27-20 loss to South Alabama.