Can Tech get the ACC back in the national-title mix? 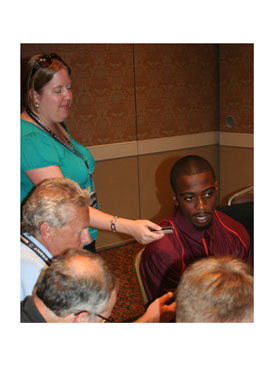 it’s been a while since the ACC has been a relevant factor on the national-championship scene. Virginia Tech seems poised to make some noise to that end in 2010.

“That’s our goal. I think if you’re in the hunt enough times, one of these days, it’s going to work out. That’s our plan. There’s no denying that that’s our goal at Virginia Tech. That’s our plan,” said Tech coach Frank Beamer, once again the preseason favorite to win the Atlantic Coast Conference, and a trendy Top-5 national pick as the days count down to the start of training camp next month.

Beamer’s Hokies have been in the hunt off and on for the last decade, starting with the 1999 team that went 11-0 in the regular season and took a lead into the fourth quarter of an eventual 46-29 national-title game loss to Florida State.

As recently as 2008, Tech finished the regular season at #3 in the BCS rankings, just on the outside looking in at a berth in the big game.

“You want to be in that conversation,” said ACC Commissioner John Swofford, alluding to the conversation around possible participants in the big game, which has featured FSU, Virginia Tech and Miami (the latter two taking part before they were members of the ACC) in the past decade.

The ACC was not in the conversation in 2009. Neither FSU nor Miami enter 2010 even on the periphery, with the ‘Noles coming off a subpar 7-6 season and Miami stuck behind Virginia Tech in the Coastal Division, not even expected to make it out of divisional play into the ACC Championship Game as a result.

“I think we’ve had competitively more depth than we’ve ever had before. We’ve had some terrific out-of-conference wins and some very, very competitive games and some unpredictable games within the league,” Swofford said.

“We’ve had a lot of good teams. We’ve got a lot of teams that are getting better. I don’t know that we’ve had a great, great team the last couple of years, but I think we’re working our way there. And I think we’ll be back in that conversation. Hopefully soon,” Beamer said.

If soon is this year, it’s looking like it’s going to be up to Beamer’s Blacksburg bunch. The Hokies will feature another one of Bud Foster’s suffocating defenses and an offense that senior quarterback Tyrod Taylor has taken to comparing to the 1999 unit that had Michael Vick as its signal-caller putting up points in big numbers.

“I want to be, and everyone else on the team, wants to be part of a national championship for Coach Beamer,” Taylor said. “To get towards that goal, you just have to take it one game at a time. Of course you have to put everything you have toward one game, but if you lose a game, you have to bounce back.

“Our trophy room has a spot reserved for a national championship. We’d love to put that something in that glass,” Taylor said.