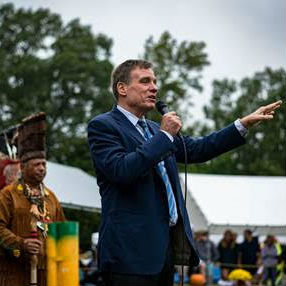 “It should not have taken 341 years to get federal recognition for the Chickahominy people, but I’m glad to be here celebrating this long overdue victory,” said Sen. Warner. “All of Virginia’s tribes pay such respect to our country and to our veterans, and it was a moral slight that they did not have this recognition until this year. The day when Chief Adkins and the other chiefs of Virginia’s tribes sat in the Senate gallery as we won federal recognition was one of my proudest days this year.”

“The Chickahominy are a sovereign nation within these United States,” said Chief Adkins. “Federal recognition wouldn’t have happened without Sen. Warner, Sen. Kaine, Congressman Wittman, their staffs and many others who worked on this bill. But as Sen. Warner remarked, there was a spiritual atmosphere in the Senate on the day the recognition bill passed. All of us know what that spirit is. So praise God, the Creator was on our side.”

​The Thomasina E. Jordan Indian Tribes of Virginia Federal Recognition Act was signed into law on January 29, 2018, after decades of bipartisan efforts by Virginia’s elected officials. Sens. Warner and Kaine secured final passage of the bill earlier that month. Six Virginia tribes—the Chickahominy, the Eastern Chickahominy, the Upper Mattaponi, the Rappahannock, the Monacan, and the Nansemond— now have the federal recognition they have waited centuries for. Many of these tribes include descendants of Pocahontas’ Virginia Powhatan tribe. These tribes had received official recognition from the Commonwealth of Virginia, but had not received federal recognition, which will grant the tribes legal standing and status in direct relationships with the U.S. government.

This federal recognition allows Virginia’s tribes legal standing and status in direct relationships with the U.S. government. Further, it allows tribes to: