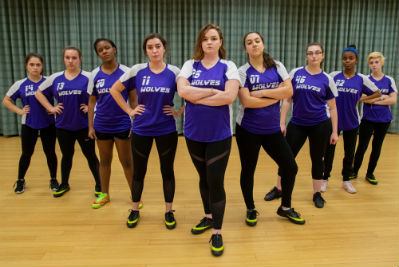 The School of Performing Arts at Virginia Tech will present its third Mainstage show of the season, “The Wolves,” by Sarah DeLappe, Feb. 18-25 in Squires Studio Theatre.

A finalist for the 2017 Pulitzer Prize for Drama, “The Wolves” explores adolescence told through the eyes of nine high school girls on a soccer team. During their weekly pre-game warmups, the team tackles relevant issues all while dealing with the complexities of being a girl in today’s society.

“The play wrestles with the girls’ emerging adulthood amidst the brutality of the world in a society that sometimes doesn’t take their ambitions seriously,” said the play’s director, Patricia Raun, a professor of theatre arts.

Each character in the production is known only as her team number. In an interview with NPR, DeLappe said that she wanted the audience to know the characters “as soccer players — not as daughters, not as girlfriends, not as sexual objects, but as athletes.”

“Each character is so much more than just a female stereotype,” said Reiss Gidner, a senior majoring in theatre performance and animal and poultry science who plays #46. “The most challenging part of the production will be to become a real soccer team. Many of the cast members don’t have a lot of experience with soccer and we are training very hard to be a cohesive team. I can’t wait to see how every woman in this cast lifts one another up to accomplish more than we could ever imagine.”

DeLappe wrote the play while finishing her master’s degree at Brooklyn College and was inspired by visiting an exhibit at The New Museum on contemporary art from the Middle East and North Africa.

“I found a lot of it to be really viscerally affecting,” DeLappe told the theatre publication StageBuddy. “The artists were dealing with their daily political reality, suicide bombs and drones and civil wars, and I felt such a great distance from that as I was on the Bowery.”

On her return home, while riding the subway, DeLappe began writing the first scene of “The Wolves.”

“I think that impulse was, what could be further away than a bunch of teenage girls on a soccer field, warming up for their soccer game?” she said. “So, that’s where the play started for me.”

DeLappe added that the play was written like a war film.

“When we start the play we’re immediately on a planet of teenage girls,” she said. “Instead of following a brigade of young men in the trenches or preparing to go to war, we’re following a team of young women who are preparing for their own sort of battle on the soccer field.”

“The Wolves” has relevance beyond young women, said Raun, who also directs the Center for Communicating Science. “The play will resonate with anyone who has ever tried to fit into a community or has experienced the challenges navigating the pressures of the outside world while attempting to grow as a person.”

The show contains language that may not be appropriate for all audiences.

“The Wolves” is presented by special arrangement with Samuel French Inc., a Concord Theatricals Company.

If you are an individual with a disability and desire an accommodation,  email Susan Sanders or call 540-231-5200 during regular business hours at least eight business days prior to the event.

Donnie Bales is a graduate student in arts leadership in the School of Performing Arts at Virginia Tech.