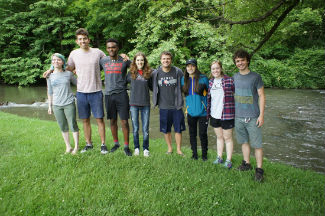 The interstate pipeline, designed to transport natural gas from West Virginia through five Virginia counties, has been the subject of factious debate for years.

The students participated in a Virginia Tech Research and Extension Experiences for Undergraduates (REEU) program funded by the U.S. Department of Agriculture, a summer course designed to train future leaders to solve resource challenges at the confluence of water and society.

The program, headed by four principle investigators in the College of Agriculture and Life Sciences, brought a multidisciplinary team of more than 20 mentors with diversified research and Extension backgrounds together with students from universities around the country to focus on research questions requiring innovative approaches to scientific collaboration and data visualization. A central theme of the nine-week experience was meaningful engagement with local stakeholders.

The students, who came from eight universities and seven disciplines, participated on one of three REEU teams: environmental science and engineering, which includes hydrology, water quality, and human health-related research; social constructs, which focuses on social science research related to water and society; or quantification and visualization, which involves computational modeling, 3D visualization, and development of other technical tools.

The program was led by Hession and Leigh-Anne Krometis in the Department of Biological Systems Engineering, and Brian Badgley and Amber Vallotton in the School of Plant and Environmental Sciences.

Together, the team members conducted interdisciplinary research to answer important questions surrounding the region’s most common concern: Is the pipeline harming our region’s environment and communities?

“There has been a big emphasis on how we’re going to serve the community with the data and information we are gathering,” said Jacob Kravits, a civil engineering student at the University of Massachusetts. “The Extension component has been a benefit. We are asked to think about why it’s important to gather this information and how we’re going to make this accessible to people.”

Kravits served on the quantification and visualization team. With a background in hydrology, he was eager to broaden his horizons by learning how to monitor water quality. His team of two was aided by five faculty, two graduate student mentors, and several technicians who provided the duo with guidance during the literature review, field work, and analyses that followed.

“It’s been really helpful to learn the research process and how to do a study,” said Jessica Barthel, a member of the environmental science and engineering team, which was mentored by a team of seven faculty members. “Things like communication, time management, and contacting the right people and getting the right information have been important. That makes this program different. This is not a traditional REU,” she said, referring to NSF-funded Research Experiences for Undergraduate programs. “You come in and get a list of things to look at for each group, but they also asked us what we wanted to look at, what our interests were, and how to tie this into the pipeline issue.”

Barthel is an environmental science and economics student at Roanoke College. Four weeks into the experience, the rising senior had met with community members and representatives of the natural gas company in order to gain a broader cultural understanding and to hear different perspectives on the pipeline project.

Like many of her peers, Barthel hopes her REEU experience will help her hone in on her research interests and learn as much as she can in order to begin to shape her career path.

As a member of the social constructs team, Michael Galeski’s focus was quite different. The Creighton University student is a sustainability major with a passion for the environment. After spending time in South Africa during one of the country’s worst droughts, he was inspired to apply to REEU because of his interest in how people interact with water issues.

“The human aspect of the environment is often overlooked,” said Galeski. “We forget the big picture. This program ties all of that together. We have people in different fields and are looking at the big picture and asking: ‘Why does this matter to me? Why does it matter to my neighbor?’”

Galeski and his teammates reviewed more than 1,000 comments posted online in response to articles published in the Roanoke Times and were mentored by an additional seven faculty. He also hoped to familiarize himself with social media discourse from individuals and groups concerned with pipeline.

“I am looking at the public perception of the pipeline and viewing comments. It’s a lot of work on the front end to wade through so much content,” he said. “I can’t wait to analyze the data to see what issues matter to different people.”

For several students, including Amir Barnett and Caleb Ring, who collaborated with Barthel on the environmental science and engineering team, as well as Kravits and Alexa Bracale from the quantitative and visualization team, the opportunity to learn about watersheds and stream ecology was exciting and worthwhile, even when nature failed to cooperate with their sampling plans. The two teams collaborated extensively and focused on the same field research sites.

“The sites have been dry and smaller than we expected,” said Bracale, a geological sciences major from the University of Delaware, referring to a local drought extending through June and much of July that dried up several of the five sampling sites. “I’m hoping to see changes in the visual imaging of fine sediment and turbidity changes as well.”

The students learned that imperfect environmental conditions are part of the research experience. In much the same way, working and living together for just over two months has helped them adapt to a new university, and form close bonds.

“We have strengths in different areas,” said Ring, a geological engineering student at the Colorado School of Mines. “Sometimes we remind each other to slow down and think about the questions. We are integrated. We live and eat together. In the field, we are each other’s research partners. We count on each other to get through.”

Or, as Galeski put it, “We are brothers and sisters by water.”

At the end of the study, the students presented as teams during a poster session at the undergraduate research symposium held at Virginia Tech on July 26, 2018. Each team also developed and shared a website focused on their research, and on outreach to the general public. Their websites are available on the REEU program website.

“We are doing three websites, three posters, and one story map — an interactive website that tells stories by using maps,” said Kravits. “It’s telling stories with a spatial dimension. When you have stories like these, this technology enables you to share them in a unique way.”

After coding more than 1,000 comments posted online in response to news articles, the social constructs team found that the key issues mentioned were land rights and corporate overreach, with additional frequent mentions of the environment and health. Meanwhile, in the field, the environmental science and engineering team found that runoff from pipeline construction negatively impacted water quality, stream morphology, and the abundance and diversity of instream insects.

In parallel, the quantification and visualization team developed a method for utilizing inexpensive time-lapse cameras and image processing to estimate sediment deposition in the impacted streams that local landowners might be able to use to document water quality changes.

“It’s intensely gratifying – and humbling – to see how deeply these students committed to immersing themselves in every aspect of a very complex ecological and sociological issue,” said Krometis. “We could not have accomplished any of this without the incredible generosity of our research faculty mentors, regulatory and industry partners, and Virginia Tech Extension faculty.”

Though the students have now returned to their home universities, the summer program will continue for at least another two years. Visit the program’s website to learn more and apply.