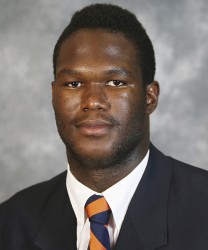 Remember when UVA linebacker Max Valles was adamant that he wasn’t going to declare for the NFL Draft? That was so-o-o last month.

“After talking it over with my family, I am officially declaring for the NFL Draft,” Valles, a sophomore who was second in the ACC in 2014 with nine sacks and seventh overall in the conference with 12.5 tackles for loss.

He had been rumored in December to be on the verge of declaring for the draft, before denying so on Twitter. Valles apparently had a change of heart over the winter break, to the obvious dismay of UVA football coach Mike London, who in a statement today said he felt Valles “was a player who could really benefit from playing another year of college football.”

“I believe he was on the verge of blossoming into a dominant player,” London said. “He took a lot of time during the semester break to think this decision through, and he feels it is the right thing to do at this time. I hate to see him go, but I want to wish him the best on his choice to declare for the NFL draft.”