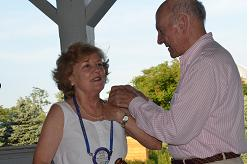 Judy Mosedale of Staunton will serve as the 2013-2014 president of the Staunton Rotary Club.

Mosedale is president of the New Theatre Limited Partnership, the corporation that owns the Dixie and the Arcadia Building. A native of New York City, she spent her formative years in Richmond, taught public school in Newton, Mass., for 16 years, teaching English and social studies and directing the annual school musicals.

Mosedale moved to educational administration in private school in Andover, Mass., for 12 years, before coming to Staunton in 1999 to be head of Hunter McGuire School.

She made a transition out of education and was the executive director of the Staunton Performing Arts Center from 2003-2012.