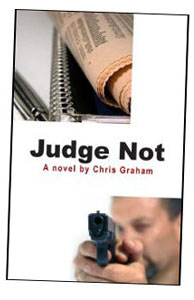 The January River City Radio Hour will feature the opening chapter of Judge Not, a new mystery serial by AugustaFreePress.com editor Chris Graham. The Jan. 20 Radio Hour is at 6:30 p.m. and 8 p.m. at WTA’s Gateway in Downtown Waynesboro.

Judge Not is the tale of a misplaced newspaper reporter who finds himself in a small Southern town. When he is sent to cover a possible terrorist attack, he finds himself mired in the undercurrents of local politics.

Graham is an award-winning writer and the author of three books – Stop the Presses, a collection of humorous short stories; Mad About U: Four Decades of Basketball at University Hall, a book chronicling the history of the former home to UVa. basketball; and Judge Not, a novel from which the River City Radio Hour serial was adapted.

The January Radio Hour will also feature the cast of Closer Than Ever, a musical revue built on the “songs of experience” by Richard Maltby Jr. and David Shire. They have been described as “intimate, insightful tales of love, security and happiness.”  The cast of Closer Than Ever includes Elizabeth Brandon, Nancy Houseknecht, Jeff Ryman and Hank Fitzgerald who also directed the production. The musical revue will be presented at WTA’s Gateway Feb. 2-5.

The Radio Hour also features the ever-popular Boogie Kings led by Richard Adams with William Hayes and J. T. Fauber.  Marsha Howard, The First Lady of Comedy, will offer a new batch of her jokes.

The merchant of the month is Stella, Bella, Lucy, a new restaurant/antique shop in Downtown Waynesboro.

Reserved tickets for the Radio Hour are $10 and are available online at www.WaynesboroGateway.com, by calling 540.943.9999 or at the door. Snacks and beverages available.